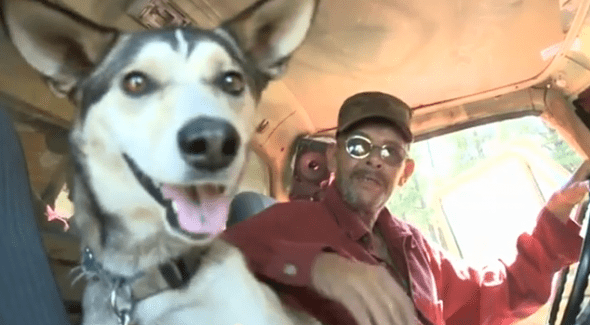 For those of you who have been following Life With Dogs for awhile, you may remember the story of Rusty Reed and his dog Timber. Rusty was a nomadic military vet who would travel the southwest US with his dog, camping out wherever and however long they could. While staying on a Utah hilltop, Timber wriggled out of his collar and took off into the wilderness.

Rusty spent three days searching for his beloved malamute-shepherd mix, but was forced out by thickening wildfire smoke. It broke his heart to leave. Timber had been his traveling companion since 2009, when a friend who owed him money gave him a choice between money or a puppy.

“A dog lasts longer than money,” he surmised.

Rusty had met a woman named Sue Rogers while in Arizona, and the pair bonded over their love of camping and traveling. He called her to relate his sad news of Timber’s disappearance. Sue runs a blog site where she shares her tales of life on the road with her dogs, Bridget and Spike, and she passed along the story with her readers, hoping that other campers might find the dog.

Working together, Sue and her readers were able to locate Timber, who had been found in Loa, Utah, but brought back home to Colorado by campers after his owner could not be found. Rusty drove out to collect his much-missed boy, who nearly broke his leash in excitement at the sight of Rusty.

Now their happy story is even happier – Rusty and Timber have recently acquired a home in Chino Valley, AZ. The 700-square foot, single-wide mobile home might not be much to some, but is practically palatial to the man who has spent the last 16 years traveling. He is able to lease the home by paying one third of his military pension on rent and utilities, as part of the US Department of Veteran Affairs and US Department of Housing and Urban Development’s program targeting chronically homeless vets.

The first night on the sofa was challenging – Rusty was tempted to retreat to the safety and comfort of the camper he had fashioned on the back of his ’75 Ford pickup truck. Knowing that it would be better to get used to it sooner rather than later, he followed Timber’s example and settled in.

“What a roller coaster of emotions Rusty rode as he tried to reconcile himself to the idea of leaving a life on the road to living in a stationary house,” Sue said. “Now, he’s like a kid at Christmas!” 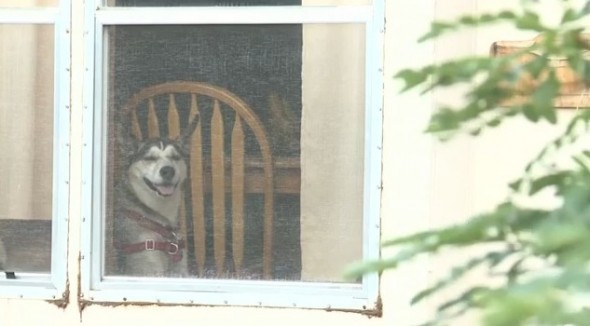 It was made much easier for Rusty because of the donations sent in by Sue’s readers, whose hearts had gone out to the man whose dog disappeared. When he moved in, all of Rusty’s worldly possessions could fit on a book shelf. But gifts started flooding in. Comforters, sheets, pots, pans, dishes, glasses and lots of dog treats all piled up. Two readers, Larry and Vicki Reighard, even bought and assembled a dinette set.

“We were just heartbroken last year when we found out Timber was gone,” Vicki said. “But to know how it turned out was so amazing. Now, we’re just happy to help them settle in. It was the least we could do.”

Others sent in gift cards, which has allowed Rusty to purchase a full-size bed and a small television. He stays in the smaller of the two bedrooms so he can use the other one for something he hasn’t been able to enjoy for a long time – model trains. Right now it’s just a simple, oval track, but he hopes to expand it over time.

Having a permanent home has also allowed Rusty to do things he could never dream of when he was living in places for only two weeks at a time. He will be installing a fence so Timber can romp around and play fetch off his 50-foot leash. He will also be putting in a vegetable garden. Fresh veg was something he had to live without for awhile. He can also enjoy the benefits of things many of us take for granted – a washer, an electric stove, and a refrigerator, where he is already stocking up on something he’d missed – ice cream.

Rusty’s health is improving since he is no longer on the road all the time. His back feels better, not being hunched over a wheel or in a truck bed; his hands don’t shake as much, and his overall health has improved since he is no longer subsisting on processed foods. Life is much easier now.

The hardships have been many, and though any big life change needs an adjustment period, Rusty is enjoying being tied down in one place. So is Timber.

“Just the other day, I said, ‘Home, Timber, home,’ and he went to the house instead of the truck.  First time.”

But Rusty knows that a house doesn’t make a home.

“Wherever me and Timber are together,” he said. “That’s home.”