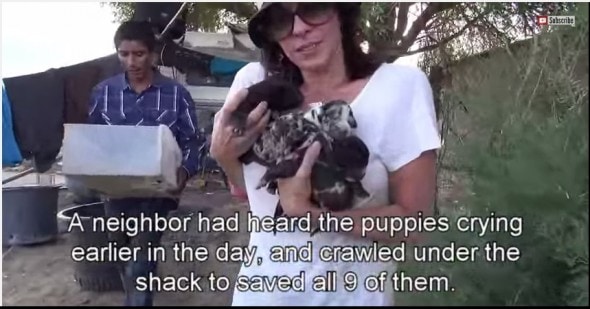 Eldad Hagar and the good people from the Hope for Paws dog rescue have done it again.  This time they have rescued a total of three dogs and nine puppies who suffering and starving under a trailer in the desert heat.

Hope for Paws received a call from someone, telling them about the family of dogs striving to stay alive together out in the Arizona heat.  One of the three adult dogs had given birth to a litter of puppies, and volunteers were called in to take them out of the heat, and into the loving care of rescue team.

The first dog, Delaney needed no convincing at all.  She actually came right out on her own to waiting volunteers, and couldn’t be more appreciative for the rescue.

Dharma was the second dog to be found.  She was a little shyer than Delaney, and needed a touch of encouragement from volunteers in the form of food.  Dharma did eventually decide that the free meal and offer of love and care from the volunteers and Hagar was okay, and she went along with the rescuers as well.

Someone that lives near the rundown shack the puppies were born under, heard the puppies crying and crawled up underneath to save them.  He brought them out from under there and into his home for safe keeping and then called Hope for Paws for help with the adult dogs.

The third adult dog that was rescued was named Nelly.  She, just like Delaney, was happy to see rescuers as well, and gladly went with them for some much needed food, and care.  We’re willing to bet that cheeseburger Nelly was given was just about the best darn cheeseburger Nelly has ever tasted.

Just to be sure, the neighbor crawled under the shack one more time.  No other dogs were to be seen, so the rescue team packed things up and got the dogs on their way to very much needed love and attention.

Now, the task of finding great forever families for these guys is at hand.  Hope for Paws can be contacted through their Facebook page, or you can click here to go to their website.  Anyone interested in adoption can inquire at either site.