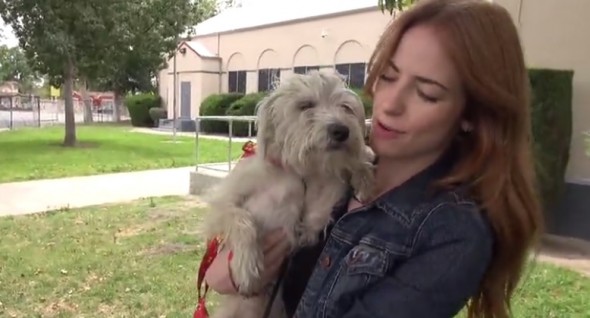 When the rescuers were first told about Seymour, a stray dog that was taking up residence outside of an elementary school, they were told he’d be a difficult rescue.  Anyone that would get close to him, would send him bolting off and away, so they knew that this wasn’t going to be the easiest rescue they’ve ever done.

That’s when Hope for Paws was called out to help Seymour.  Eldad Hagar and his friend Jaime Ray Newman went to to meet him, and they were lucky enough to get a leash on him on the first go!  However, as you can see, Seymour was less than happy about being snagged.  However, he wouldn’t be this way for l

It took a bit of time, but they eventually won Seymour over, and they were able to bring him in and clean him up.  He didn’t have to wait at a shelter very long either, as he’s already found a forever family that promises to love him and keep him safe forever.

For more on Hope for Paws, or to donate to their very worthy cause, click here.