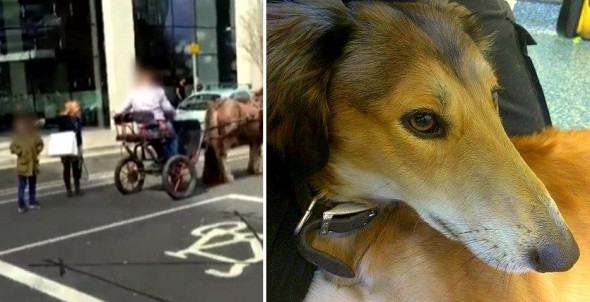 An emaciated dog nearly met a grisly end at the hands of a pair of monstrous men and a boy being commanded to kill the dog, who was being dragged behind a horse-drawn cart.  But a group of witnesses banded together to stop them, and got her to safety.

UK shoppers in the city center of Cardiff were shocked and appalled to see a poor dog collapsed and being dragged helplessly behind the cart.  Rachel Lansdown told WalesOnline what happened:

Basically there were two men driving carts with ponies attached to them and the cart at the back had a dog attached to it. The men were smacking the horses to go faster and the poor dog could not keep up so was pretty much just being dragged along behind. 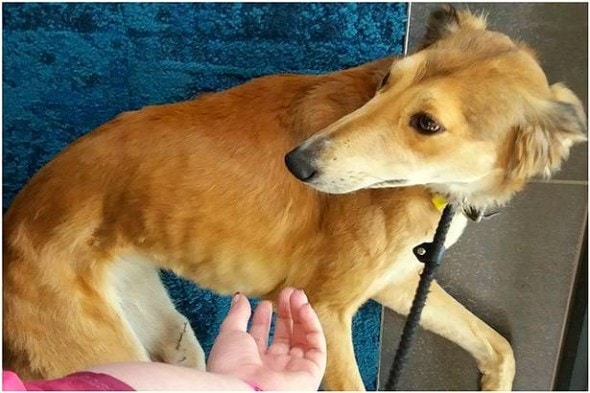 As the man got just outside the Admiral building by the Motorpoint Arena the carts had to stop in traffic and the dog just collapsed.  At this point people were shouting and I started to run over.

A man driving the cart sent another boy off to try and get the dog up.  He was pulling at the rope and the poor dog was just lying there lifeless. It was horrendous!  As I got to the dog a few other people started to come to help but the guy with the cart was shouting ‘kill it, kill it!’

A woman started shouting at him saying he wasn’t having the dog and at this point the boy got back on the cart and a man carried the dog to the side of the road.  I unattached her collar so she could breathe as she lay on the road. My boyfriend put his coat over her.  Another girl was also trying to get water into the dog’s mouth.

After about five minutes someone lifted the dog up and took her into the Admiral building while we all waited for her to catch her breath.  Another woman phoned the police and the dogs’ home.  We all sat with her for more than an hour and when she eventually perked up she had a good drink and a little bit of food which we had bought.

The dogs’ home eventually came to get her and before she went she gave everyone a kiss and a cuddle.  It was as if she knew we had helped her and she was saying thank you.

The dog, now called Baby Girl, was taken to Friends of the Dogs in Wales.  She has been seen by a vet and is now being pampered by staff.