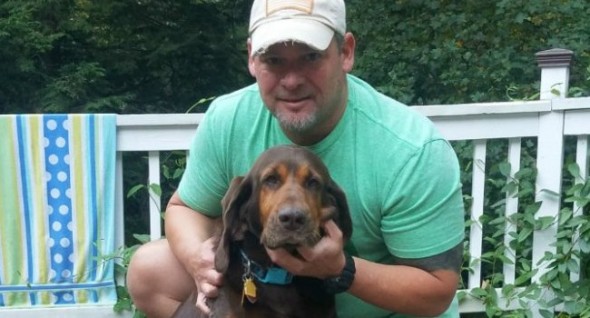 Brad’s most memorable day in military service was September 11, 2001.

“[I was] sitting in an ambush site in Kosovo when we got the call on the radio that terrorists flew planes into the World Trade Center and the Pentagon, he told Pets for Patriots’ Wet Nose Blog.”

Later that same year the Marine Corps veteran sustained a serious injury while on deployment, ending his military career. Now in his final year studying law, he interns with the United States Attorney’s Office and works part-time as a real estate agent. He shares a home with his girlfriend, Shannon, and her teenage son and younger daughter.

Brad is also a dog lover, and in the wake of loss, he was leery about welcoming a new fur baby into his life.

“I had lost both of my dogs last year to illnesses associated with old age,” he said. “Having a dog-less house was strange and felt empty. I knew I wanted to get another dog, but felt as though I would be dishonoring the memory of my dogs.”

Though conflicted about adopting, he still wanted to help rescue dogs, and so the Connecticut resident decided to run a 5k race in support of the Danbury Animal Welfare Society.

“At the end of the race there were refreshments and some of the shelter dogs were milling about. Then along came this dog who strutted in to the gymnasium.”

Her name was Dolly.

“I went over to check her out and it hit me instantly that we needed her and she needed us,” he recalls. “It was fate.”

Brad did not adopt the then 6-year-old Redbone Coonhound right away. It was upon his return visit to the Danbury Animal Welfare Society that the Marine Corps veteran learned about Pets for Patriots, and about the many benefits of adopting through their partnership with the shelter.

“It was certainly helpful to have the benefit of this program,” he said, adding, “it made the process very easy, and helped with the transition for Dolly.”

And Dolly turned out to be the perfect dog to add to their family mix.

“We have a complete home again,” he says. “She settled in very quickly and has been a huge part of our lives in such a short time.” In fact, laughed, within an hour of going to her new home Dolly managed to “claim her spot on the couch.”

The big hound isn’t lazy, though, she enjoys active pursuits, including “a few hikes and a 5-mile run.” Brad concludes that “she has been amazing” and is with his family “for life.”

“If you have the time for a pet and have the space, then please go save a shelter dog,” he says. “It will change your life in the best way. You think you are saving them, but really, they are saving you.”