When Jasmine arrived at a UK wildlife sanctuary she was starving and cold.  She didn’t forget the kindnesses bestowed upon her, and dedicated her life to being a foster mother to puppies, fox cubs, a fawn, chicks, badger cubs, guinea pigs, and rabbits.

Greyhounds like Jasmine, bred to race, are trained to chase rabbits.  But that wasn’t the life Jasmine was destined to live; as a foster mother, she snuggled right in with bunnies.  But her closest friend was a fawn called Bramble.  They were nearly inseparable until Bramble was rehabilitated enough to be released back into the wild. 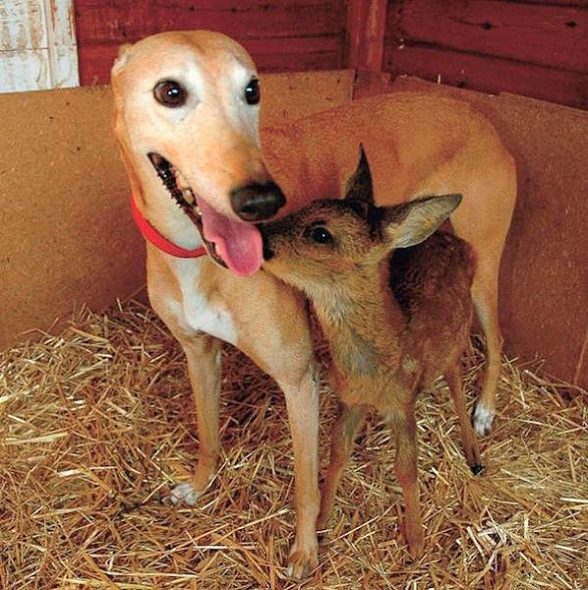 This comes from the Nuneaton & Warwickshire Wildlife Sanctuary in the UK:

Jasmine was a rescue dog who lived at the sanctuary until her passing in 2011. She was no ordinary rescue dog, she was the most amazing greyhound in the world!

She was only a young pup when she was locked in a shed and abandoned. When she was discovered by the police many days later she was emaciated, mange ridden and terrified. She was taken to the RSPCA quarters in Coventry where Geoff [Grewcock] just happened to be visiting several weeks later. They were introduced and as they say ‘the rest is history.’ She came to live with Geoff at the sanctuary. Each day her confidence grew and her personality flourished.  But the most amazing thing was yet to come…. 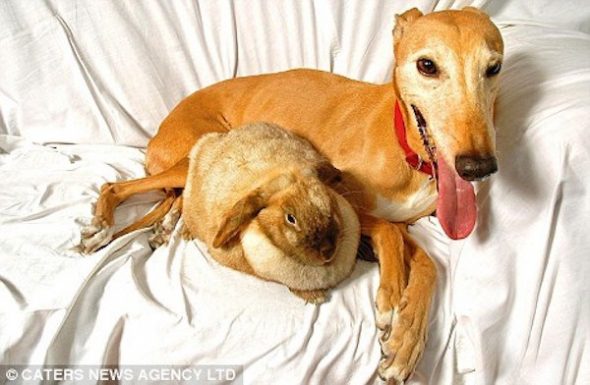 It turned out Jasmine was a natural ‘Mother hen.’ One day a young fox cub was brought in to the sanctuary. She had been tied to railing and left to die. She was very small and weak and the outlook wasn’t bright.  That was until Jasmine sauntered over to the fox cub’s basket and started to lick her. Geoff was immediately concerned, followed by bemusement, followed by amazement as he saw before his eyes the fox responding to Jasmine’s touch. He quickly realised that Jasmine was acting in the same way the fox cub’s mother would have done in the wild! 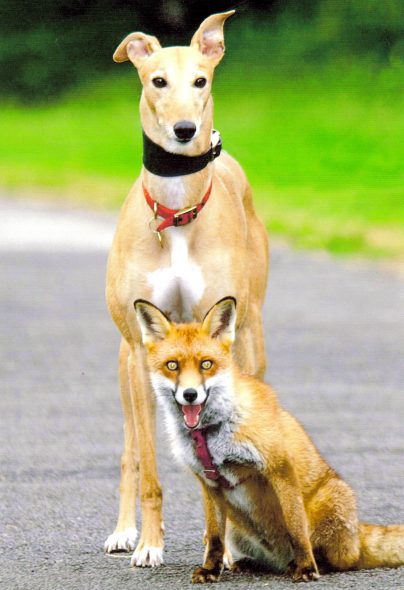 Over the next few days Jasmine continued to ‘mother’ the fox cub, whom Geoff had named Roxy. Roxy grew strong and grew up. She lives at the sanctuary with Jasmine, who is mum and best friend all rolled into one.

Jasmine was truly one of a kind. She mothered many of the sanctuaries residents back to health including Bramble the roe deer, humbug the badger and two of the other sanctuary dogs just to mention a few.

Sadly Jasmine passed away in 2011. She is greatly missed by all at the sanctuary. 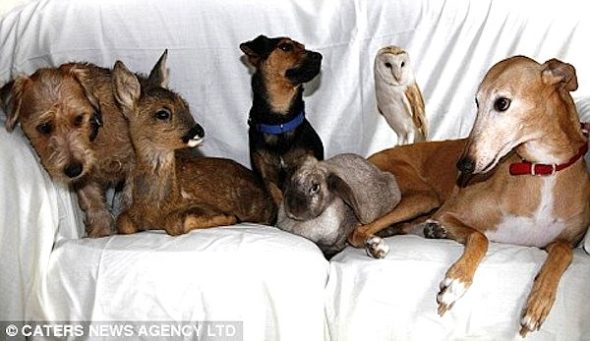