Otis, reports from Chron, the Washington Post and other publications say, was already known in the small town of Sinton, TX, near Corpus Christi, but after a passerby snapped a shot of him roaming the streets carrying a bag of dog food, he’s become an Internet celebrity.

Otis was staying at “grandpa” Salvador Segovia’s house at the time; the dog’s primary family had left town as a precautionary measure.

Otis was in the home’s screened-in porch, but somehow made a break for it.

Segovia later discovered he was missing and headed out on a mission, circling the area in his car, searching for his grandson’s dog.

“I stuck my head out yelling and yelling, and no Otis,” Segovia told the Washington Post. “The following morning, I got out and kept yelling, circled the block and everything, and nothing. We didn’t know where Otis was.”

Around the same time, Tiele Dockens was headed through the area, checking in on the homes of loved ones who had evacuated, when she spotted a dog walking down the street. He carried a large bag of dog food in his mouth. 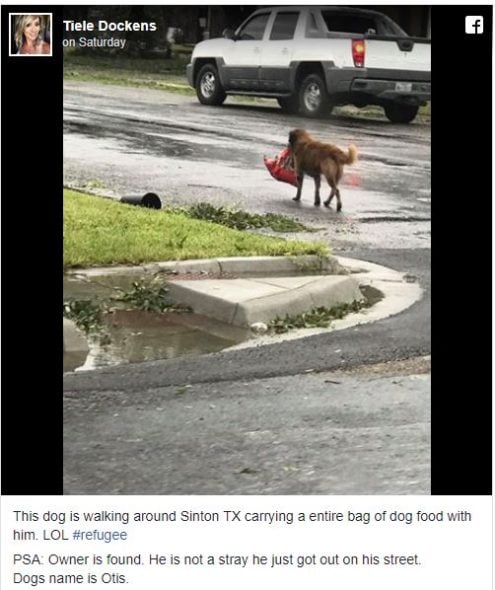 “It’s like he’s on a mission,” said Dockens, who lives a few miles away from the Segovias. “I just thought it was so cute.”

Naturally, she shared an image of Otis on social media and BOOM! It quickly went viral.

Dockens wasn’t just in it for the likes, though. Concerned the dog might be lost, she followed him and ended up outside Segovia’s home.

“This lady comes by and tells me, ‘Is that your dog coming down the road?’ ” Segovia said. “And I turn around, there comes Otis, and he’s carrying food!”

Otis is a shepherd mix with a naturally somber face, folks everywhere seem to take to him, Segovia said. Otis is a bit of a wanderer and occasionally pops into local businesses, where people are generally happy to give him a food handout.

“Otis is a smart dog,” Segovia said. “He knows where to go pick up a treat.”

Otis is probably about 6 years old, Segovia said. Though the dog belongs primarily to Segovia’s 6-year-old grandson, Carter (Otis has been wonderful comfort to Carter after multiple hospital visits for seizures and asthma), he acquired the pup when a man who’d planned on dumping him said Segovia could have him if he wanted.

Though it was unclear whether Otis took the dog food from the screen porch or acquired it at a local lumber yard (reports were conflicting), one thing is clear: he has become a symbol of strength and perseverance in the wake of a serious storm.

We can’t help but say it: we love his face, too!