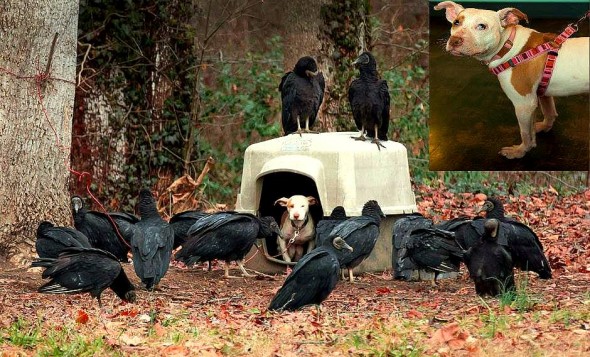 Seeing vultures gathered around another animal is never a good sign.  In fact, it’s a macabre, pre-death funeral.  But not for Lilo.  These bird were photographed waiting around for her to become their dinner, and it’s because of them that she’s now living inside, and beloved beyond measure. 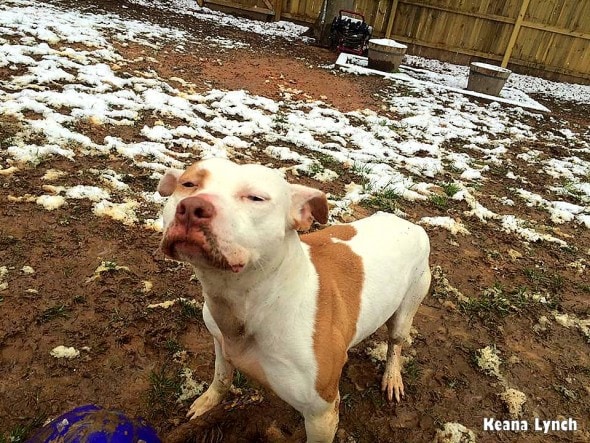 In late 2014, this saturnine photo circulated the ethersphere, bringing to light the bleakness that is the life of a chained dog.  These wonderful creatures want nothing more than to be our constant companions, yet so many humans insist on their confinement – in the bitter cold, in the driving rain, in the blistering heat – with little to no nourishment of any variety.  They often die of starvation or hypothermia, and Lilo was likely on her way to join the thousands before her who have perished in this manner. 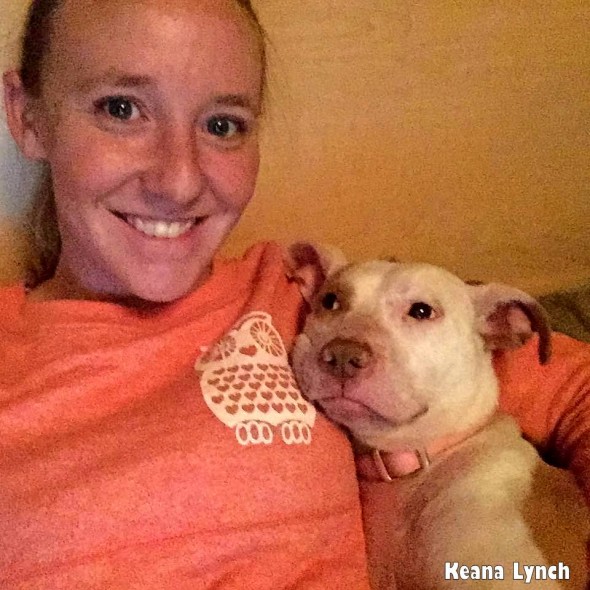 On December 30th of 2014, a number of concerned neighbors called the Guilford County Animal Shelter in Greensboro, North Carolina after seeing Lilo scrooched down in her meager shelter, besieged by a venue of vultures.  She was picked up by an animal control officer, and a notice was left on the resident’s door.  The owners said the vultures arrived on Christmas day (yet they chose to force Lilo to remain outside).  They said they’d be coming in for her, but they never did (*phew*). 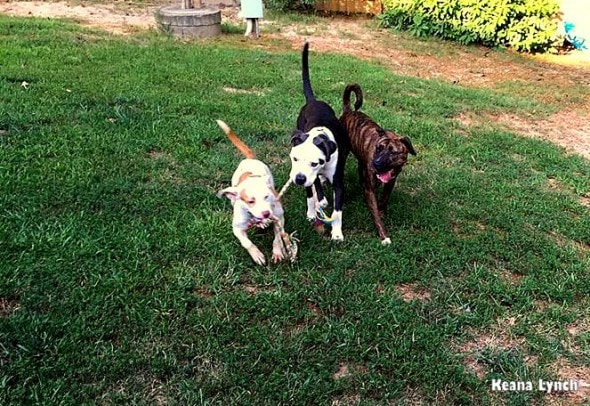 Guilford does not allow people to adopt pit bulls from them – they have to be taken in by already inundated rescue groups, or else they’re euthanized.  Thankfully, Merit Pit Bull Foundation spoke up for her, and from there she was placed in a foster home with Keana Lynch and her boyfriend, Travis Henley.  She was named Lilo after the character in Travis’ daughter’s favorite movie, Lilo & Stitch. 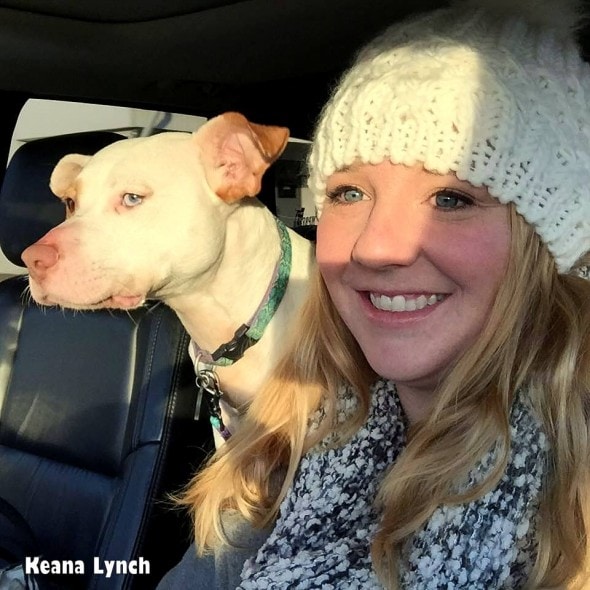 The eight-month-old girl wasn’t quite ready for the vultures, but she certainly wasn’t the picture of health.  She was underweight and had some healing cuts and sores on her ears and tail.  In addition to becoming physically well, this puppy had to learn what was expected of her as an indoor pet. 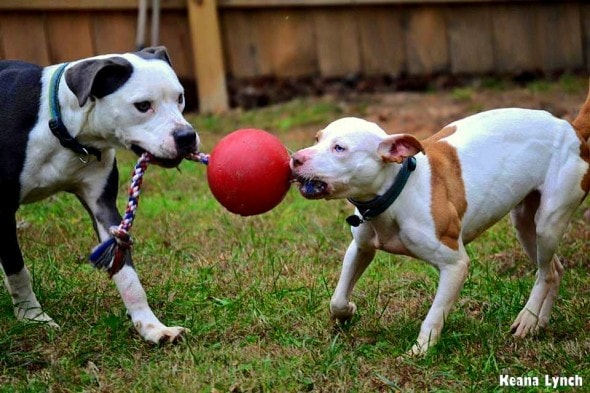 “She definitely didn’t know what it was like to live inside,” Keana told the Greensboro News and Record. “But she’s got a great personality. She loves to snuggle. She loves her antlers, loves to chew on them. She has no clue yet on what to do with the other toys, though.”

That was a year ago.  Now she’s a permanent member of the family. 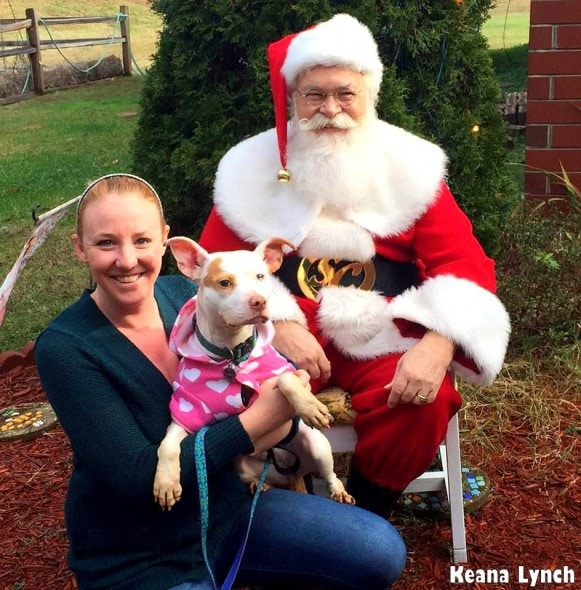 And now Keana and Lilo are helping to put an end to the cycle of animal abuse by working in schools.  For kids who aren’t learning how to properly treat animals at home, this is hugely important.

“Lilo has also attended a few education outreach sessions with me at local schools to help educate kids about rescuing and how to interact with dogs correctly,” Keana explained. “She is an absolute natural to help educate about pit bulls and rescuing.” 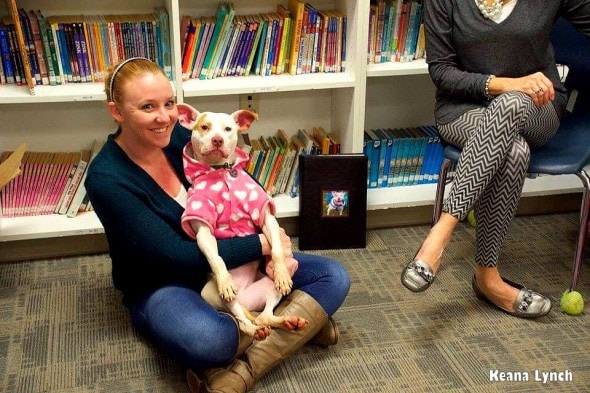 Lilo also participates in a reading buddies program, wherein kids read to dogs, which allows them to practice their reading skills without having to feel self-conscious.

Hopefully programs like these will mean that many more kids will grow up to be adults to who not only respect animals, but truly love them. 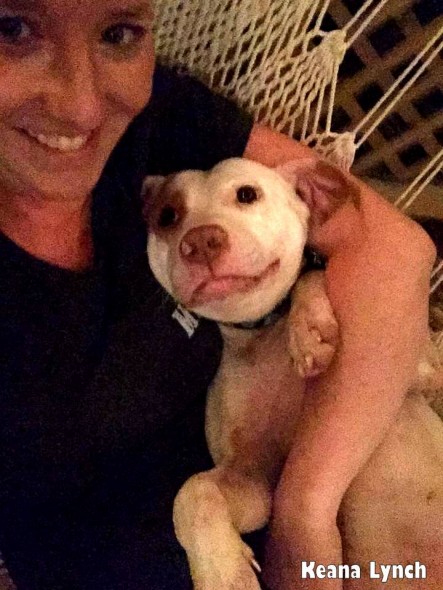 “[I’m] so happy that Lilo is making such a difference in rescue. Hopefully she will inspire some to unchain their pups,” Keana concluded.

If you live in the Greensboro area and are in the market for a playful, snuggly ball of endless entertainment, head over to Merit’s Facepook page and check out some of their adoptables.