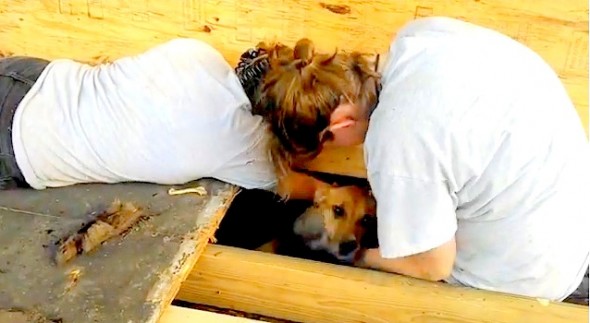 Just months after being adopted from a shelter, Delilah Gagliardi’s dog Allie went missing.  Thankfully, she didn’t get too far, but she did spend two days trapped beneath her Clearwater house without food or water.  Three humane society workers came to help, and after hours in the heat digging her out by hand, Allie was finally freed.

Delilah and Allie* were a match from the moment they met, so she was completely distraught when the 35-pound shepherd mix went missing a couple of days ago.

“I was devastated,” Delilah said.  “I was scared for her.” 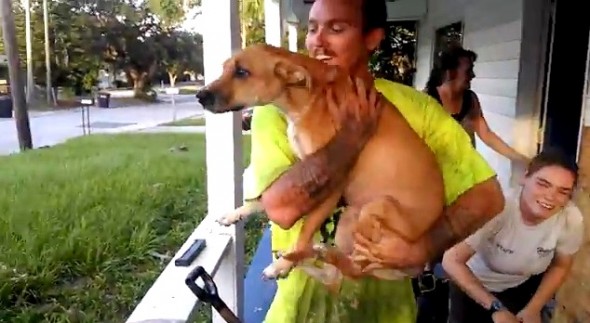 After two days of searching, Allie still was nowhere to be found.  But then – Delilah started to hear a distinct whimpering sound.  Following the noise, she discovered it was coming from under the floorboards.  But how?

Unsure of how to get to Allie, Delilah called the Humane Society of Pinellas County.  Digging dogs out from under houses isn’t “a service we normally provide,” said spokeswoman Twila Cole, but Maddy Ferguson, Shelby Ross, and Abigail Kamleiter came to the rescue. 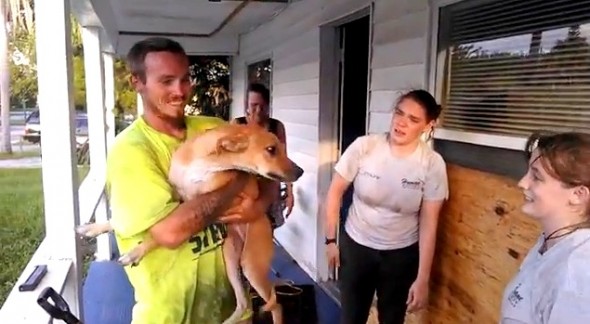 Even if that meant digging by hand.  Allie was trapped in a tight area that didn’t allow for equipment to be used without destroying the house.

The women spent two hours in the sweltering heat digging a way out, Allie was finally pulled from a dirt hole and reunited with her overjoyed family members.  Her appreciation is clearly seen on the video as she happily trots around to everyone to “thank” them.

After Allie was rescued, her family found out how she got trapped:  a very small opening in one of the home’s corners allowed her to squeeze through and get under the floorboards.

“The big takeaway is to remember that no matter how secure we think our backyards are, don’t leave your pets unattended,” Twila said.