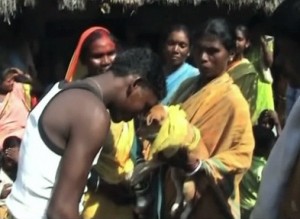 I now pronounce you… man and dog.

At a tribal gathering in India’s Jharkhand state, two humans married dogs in an attempt to ward off evil spirits. A young man and a young woman both wed canines in traditional marriage ceremonies.

“I have got an additional tooth growing above, that is why I am marrying a female dog. Evil will ward off from me whomever I marry in future,” said newly married Lakhan Hansda. The tribal community believes that it is a bad omen if a person’s tooth grows above its usual position inside the mouth, and that it will mean an early death for the person’s future spouse.

When it was time for the girl to wed, the dog was accompanied by a procession of guests. “It is believed in our society that if the tooth comes in a little higher than the usual place (inside the mouth), then to set the planetary arrangements right, the wedding with the canine takes place,” said Ram Soren, a guest at the wedding.

These are not mock weddings, and are solemnized and recognized as official and binding. A celebratory feast was organized for those who attended the ceremony – see the video for raw footage of the unusual festivities.