Winter is not easy for many, particularly those who are homeless. Many of them could spend nights in shelters, but their companion animals do not receive the same welcome. And those, like Shawn Harmon, who refuse to give up them up, must endure the cold. Thankfully there are organizations like My Dog Eats First, whose sole missions are to help these people AND their pets.

Shawn Harmon stood on a Louisville intersection on a frigid January day, hoping one of the many drivers who passed him by could help him find what he was looking for – a job. His pit bull, Tucker, sat at his feet, shivering.

One woman gave him a coat, which he immediately draped around Tucker. Another handed him a blanket. A man proffered a couple of dollars. Every little bit helps. 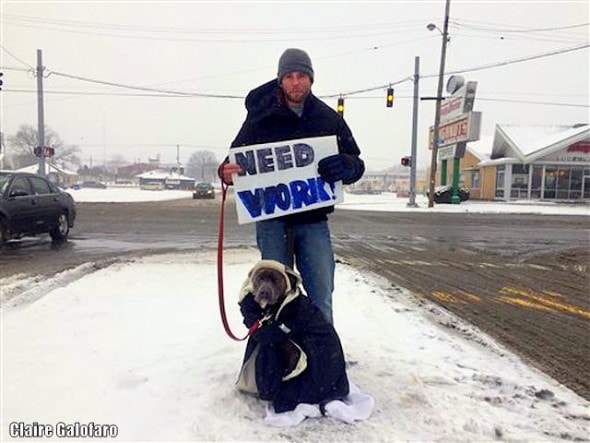 Shawn suffers from bi-polar disorder. This can make holding down a job very difficult. Some days a person with bi-polar disorder feels such deep depression – self-loathing and hopelessness – that it is difficult to even get out of bed and face the world. Other days one experiences so much mania that concentration on tasks is nearly impossible, and the static noise in one’s head is incessant and overwhelming.

Medication is often useless, as few have been developed that can alleviate both the depression and the mania without side effects that are worse than both. Effective mental health medicines are often not covered by insurance, and are expensive. Employers grow exasperated with the erratic behavior, and bi-polar employees lose their jobs. Many self-medicate in the best way they know how. And sometimes their pets are the only things that brings some comfort and stability to the endless roller coasters that are their lives.

It is unknown if this is the exact predicament Shawn finds himself in, but this is likely the case for many people battling mental illness, and how it is they wind up homeless. But there is a light at the end of the tunnel, and in Louisville, that light is the organization My Dog Eats First. I recently spoke to Beth Green, the founder and director of the group, to find out more about them, and to see if they knew of any progress with Shawn and Tucker. 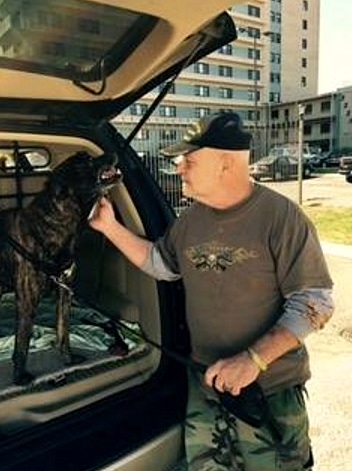 We have been helping to care for him [Harmon] and Tucker for over a year, along with approximately 15-20 other homeless with pets and countless underserved who are just trying to stay united with perhaps the only thing on the earth that loves them unconditionally – their pets.

Our mission is to provide free pet food, supplies, veterinary care, and spay and neuter services to the homeless and underserved in Louisville who have companion animals. We do so in a judgment free environment to all that are dedicated to the health and wellness of their pets.

We operate completely upon donations and volunteer efforts. We have been doing so for over two years now. We offer our services in a parking lot every Wednesday night on our waterfront. It is called Waggle Wednesday. 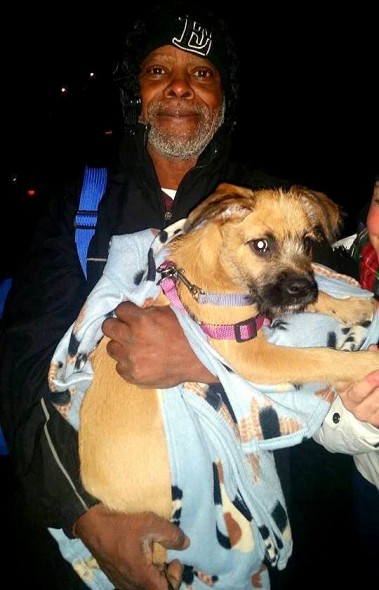 Shawn and Tucker are in housing and are doing as well as can be expected. Shawn suffers from diagnosed and unmedicated mental illness coupled with some addiction issues. He has been chronically homeless for most of his adult life. We were just able to procure a washer and dryer for him for his place and we have two volunteers who make sure that his needs are met.

We are a distributor to three other grassroots homeless outreach organizations in Louisville. They go out to the homeless camps and we supply them with pet food and supplies for the homeless that they serve with pets that can’t make it to the lot.

We have three volunteer veterinarians here in Louisville that rotate on a monthly basis and offer free basic veterinary care (rabies and licensing) in our parking lot once a month. We distribute approximately 500 to 600 pounds of pet food per week now.

These kiddos are excited for their bake sale this Sunday at Watkins UMC to raise money for MDEF!

For the last few days, the group has been posting on Facebook many of the reasons why homeless people deserve to have companion animals:

“Housing doesn’t mean that a person is good or bad. It is possible that there are some people who are homeless and have mental illness or addiction issues. There are plenty of people living in beautiful houses who struggle with the same.”

“The need for companionship is just as important as the need for food or shelter. Taking care of others, reinforces our purpose for living, People may not die from loneliness, but in some ways, they can cease to exist if they truly cut themselves off from the world. A person who has a dog to take care of and love is more apt to be healthier, to feel more a part of the world. Healthier people do not tend to be as much of a ‘threat’ to other people.” 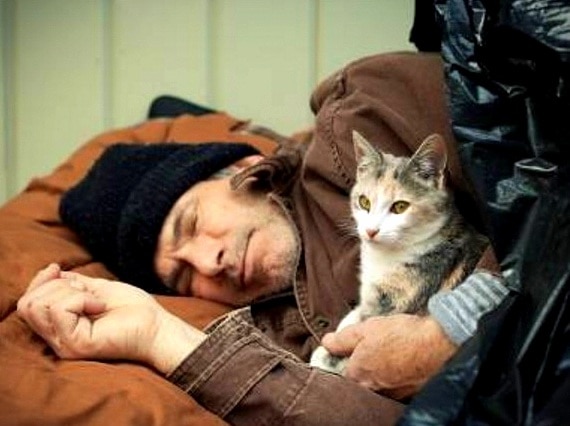 “People who love their dogs, find ways to care for them. While it is true that homeless people may struggle to find food; in this country, people don’t generally die exclusively from diseases related to starvation. I personally went hungry a day or two in my life so my dog could eat (I had housing at the time). I assume homeless people do the same, and are as tenacious about finding food for their dogs as they are for themselves. Likewise, they probably know ways to stay warm, and find good spots to snuggle. When you love another being, you find a way to take care of them. You just do.”

“Who are we to judge? Finances don’t indicate who a person is, what they are capable of, how much love they deserve or where it should come from. Poverty is not a character trait. A struggling person deserves the same intimate connections as everyone else. More importantly, having money doesn’t give us the right to make those decisions for others — doesn’t give us exclusive dominion over animals or children. When somebody makes that argument I want to tell them to get over themselves. Seriously.”

If you would like to help My Dog Eats First continue their great work by donating via PayPal, please CLICK HERE.  If you shop on Amazon and would like to have money donated from your purchase, click here.

84 thoughts on “I Might Be Homeless, but My Dog Eats First”