On December 15, 2014, two women from Muskegon, Mich., were driving down 8th Street when they spotted a small animal laying in the middle of the road inside a pothole. The women circled around the block and rescued the pet who had been injured. 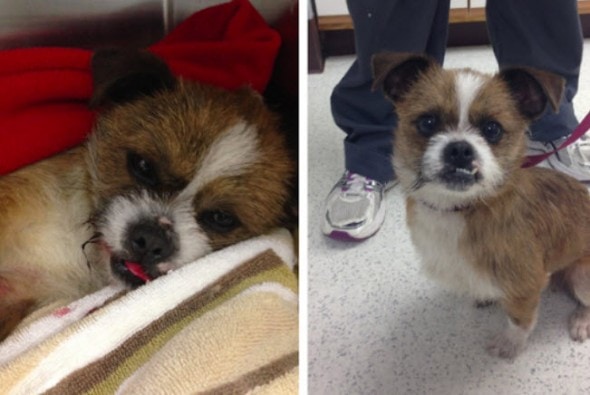 The little dog is being called Gizmo. He was in total shock after a vehicle hit him and left him in the middle of the road for dead. If it wasn’t for the pothole where the canine sought refuge, the little dog could have been run over by other passing vehicles.

Abigail Arends and Anna Burnett rescued the pet and drove him to Lakeshore Animal Hospital Muskegon. They feared the puppy wouldn’t make it through the night because he was lethargic, wouldn’t eat, and showed limited body movements. Veterinarians even feared the tiny dog suffered from multiple broken bones, but an overnight stay at the clinic and sometime to decompress from the schock and stress, was all Gizmo needed to bounce back.

The next morning, the dog was chasing veterinarians Ingrid Hutchins and Carin Forberg and he couldn’t stop eating treats. It was as if the dog had never been in an accident and lucky for the pet, he did not suffer any internal injuries.

Gizmo did not have a microchip or any identification tags when found. Rescuers hope his family comes forward and claims him, but in case no one is looking for him Arends said she would adopt him. Yet, she is not the only one willing to adopt Gizmo, many locals have contacted the clinic and asked about taking the dog home.