Injured Runaway Puppy Checks Himself Into the ER of a Hospital 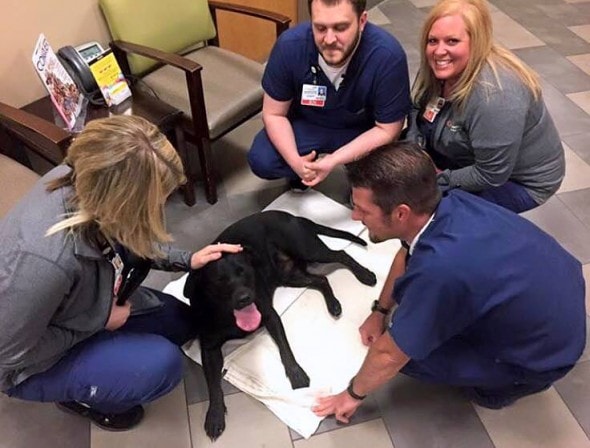 When Capone slipped his collar on a nighttime walk with his dad, he got lost and somehow injured himself.  Incredibly, though, he got himself to just the right place – the ER – where he was treated, and later reunited with his family.

Nick Karagianis took one-year-old Capone for a walk around 2 am after he got out of work.  The pup got his leash tangled around a telephone pole.  As Nick tried to free him, the collar came loose and Capone took off.

But this time the dog didn’t come back.  Nick got in his car and searched for him, but with Capone’s black fur, he would be nearly impossible to find at night.  Disappointed, Nick returned home to get some desperately needed sleep after working two jobs that day.  He would search again when it was light.

In the morning, he asked a neighbor passing by she had seen a black Lab around.  She hadn’t, but asked if he had seen the post from Community Hospital Anderson.  He hadn’t so she showed him a photo they had posted on their Facebook page.  Sure enough, it was Capone.

“It was a dog checking himself into the hospital,” Nick said, mirthfully. “It blows the mind.”

It turns out that around 5 am, he walked himself into their emergency room.  Injured himself, he somehow knew this is where he needed to go.  He appeared to have been hit by a car.  He was suffering from a shoulder injury, a gash above his eye, a wounded paw, and nerve damage in his neck.

“He literally walked straight up like he knew he was coming to the right place,” Dr. Thomas Short said.

“We checked him out initially in our emergency department and when our shift ended, (we) took him to the emergency vet,” explained Dr. Clay Ludlow.

Staff made him comfortable before taking him to a veterinarian, and attempted to find his owner by reaching out to the community.

“I said, ‘We need to get this up on our Facebook page,’” Short said.

It obviously worked.  Nick was overjoyed that Capone had been found.

“Thank you sooooo much to the community hospital team for taking care of my baby boy,” he posted on Facebook.  “I’m just waiting to pick him up. I was worried sick about him thank you again!”

But it was a pleasure for the hospital staff.

“He came up to us and wanted to be petted. A toddler even walked up to him and gave him a big pet and he just licked her,” Ludlow said. “It was clear he was a wonderful dog, if the owner hadn’t come forward we would have found someone to take him in no time!”

Capone is now home, recuperating.  He’s on an antibiotic and painkiller until he is well again.  Nick is so appreciative for all that the staff did for his boy – they even paid for the vet bill, under the condition that Nick get Capone neutered and microchipped.