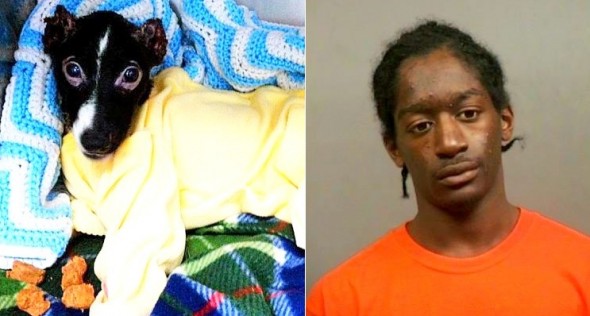 Okay, so it isn’t quite instant karma, but it definitely is karma:  Adell Ziegler, the Buffalo man convicted of setting fire to the Jack Russell terrier puppy Phoenix two years ago, was found on a street with gunshots to his groin and buttocks.  It isn’t known if there is a connection between the incidents, but we can’t say we feel too sorry for him.

On October 6th, Ziegler was found in the 600 block of Humboldt Parkway with gunshot wounds to the butt and crotch area at 9:10 am.  He was taken to Erie County Medical Center and was listed in stable condition.

In October of 2012, Ziegler set fire to little Phoenix while his nephew Diondre Brown acted as a lookout.  Both pleaded guilty and were sentenced for their crimes.

Phoenix healed up nicely and was adopted by a vet technician who treated him at the Buffalo Small Animal Shelter.