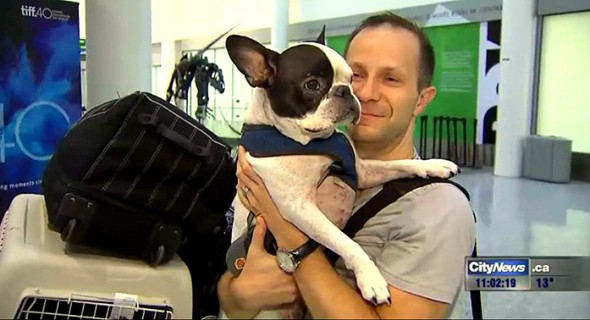 Simba, the seven-year-old French bulldog in question, was on his very first flight.  Just as the plane was about to head out over the Atlantic Ocean, the pilot noticed a problem.

The extremely low temperature due to altitude was very dangerous for the dog.  So rather than risk over-exposure, the pilot decided to land the plane in Frankfurt, Germany.  Needless to say, the dog’s human was more than just thankful.

“It’s my dog, it’s like my child.  It’s everything to me,” he said after being reunited with his dog at Pearson Airport.

According to aviation expert Phyl Durby, the pilot made the right decision.  Even if the unscheduled stop tacked on about $10,000 in fuel cost with the delay.

“If you look at the outside temperature, if it’s minus 50 or 60, there is some insulation but it will probably still get down to below freezing (in the cargo area),” said Durby.  “The captain is responsible for all lives on board, whether it’s human or canine.”