This is a story of a hero who served his country and nearly gave his life, and his best friend. SPCA International, a non-profit organization dedicated to reducing animal suffering and abuse internationally, is currently working to rescue a dog named ‘Max’ from Kuwait and transport the dog back to the U.S. to be reunited with a soldier named Corporal Michael. 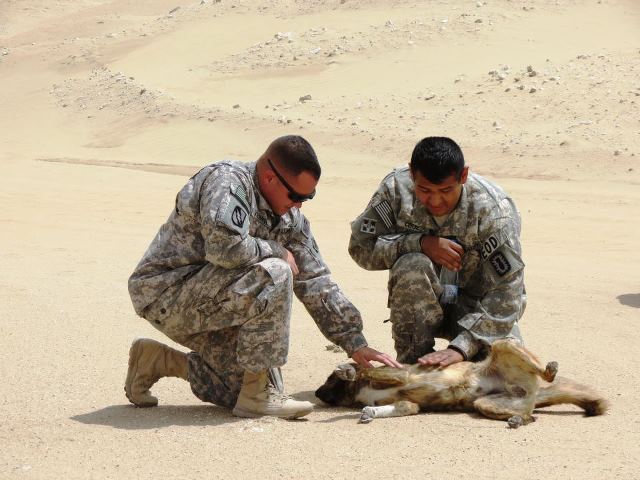 While on duty in Kuwait, Max formed an inseparable bond of love and friendship with CRP Michael who wrote to SPCA International for help rescuing Max. But in early March, CRP Michael suffered an injury that left him paralyzed from the waist down. He was flown from Kuwait to Germany for surgery and is now in Texas beginning recovery while he anxiously awaits Max’s rescue.

“We are honored to be able to help CRP Michael. He has served our country with strength and valor and we hope fulfilling his dream of saving Max from Kuwait will lift his spirits on the road to recovery”

In a letter to his wife, CRP Michael described Max’s hard life in the desert and his love for the animal and wrote, “I would give up anything to bring him home with me.” Now this anticipated reunion for soldier and family has heightened significance. For the rescuers from SPCA International, the hope is Max may be able to do something that medicine cannot – help lift the spirits of a wounded warrior.

“We are honored to be able to help CRP Michael. He has served our country with strength and valor and we hope fulfilling his dream of saving Max from Kuwait will lift his spirits on the road to recovery,” said Stephanie Scott of SPCA International. “CRP Michael’s original letter truly illustrates how important these animals are to our troops. While the challenges of rescuing these pets are great, the reward of reuniting them with deserving soldiers like CRP Michael is much greater.”