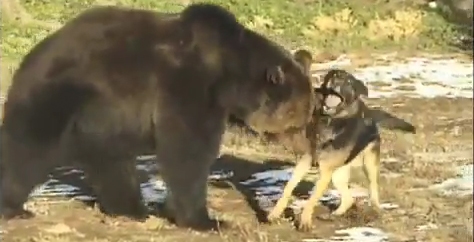 These two goofballs are a blast to watch, and it’s rare to see a Grizzly this big play so gently with a dog.

A description from the videographer:  He was found at a roadside zoo that was closing down, just a few weeks old. It was clear even then that he was a “differently-abled” bear.  As we watched him play, sweetly, innocently, not too coordinated, not too quick on the draw, the name just came out – Humble Bumble.

Life scares him. Anything new scares him. Without encouragement he would rock himself endlessly in a corner. But he trusts his mentor Boychuk the German Shepherd. It was Boychuk who gave him the courage to go to the Wildlife Garden and play. To see the care and affection with which he plays with Boychuk, holding back his strength, adds a new dimension to one’s perception of grizzly bears. Humble Bumble is a bear of character.