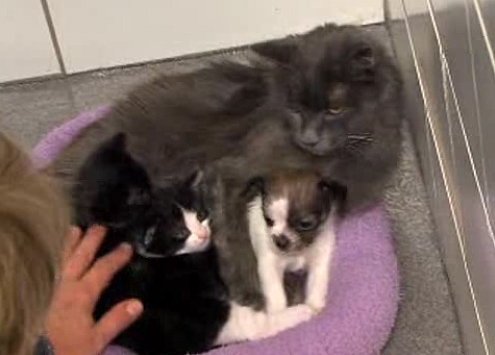 The Cleveland Animal Protective League would like you to meet a couple of their more adorable residents. After a puppy’s mother died while giving birth in early October, the owner was unable to keep up with bottle feeding, so the pup was surrendered to the Cleveland APL. That’s when Mrs. Rabbit (a stray cat recently dropped off at the shelter) stepped in and took over, mothering and nursing the hungry pup.

The new family of four will remain together in foster care for about another month until they are old enough to be fixed. They will then be put up for adoption. According to Sharon Harvey, Executive Director of The Cleveland APL, “We have an organization here that’s full of incredibly passionate, compassionate, committed humans. Now, we even have one of our animals, Mrs. Rabbit, helping us to save lives.”