It’s been an interesting year for Ryan Lochte.

The good? The Olympic swimmer brought home the gold. The bad? A senseless false robbery scandal had him leaving Rio in disgrace (and without millions in endorsement deals he’d have been enjoying in the wake of his wins).

One constant happy in his life, though (one we can all relate to) are his dogs, Yeezy and Carter. Those who follow the athlete on social media are likely quite familiar with them. The Internet is an unforgiving landscape, though, and so when Lochte took the time out to wish his Doberman, Carter, a happy 8th birthday on Twitter, one alert follower (@wholegrainne) noticed an interesting bit of math.

This was the third consecutive year Lochte had made such a post!

Of course, this sparked a hilarious — unless you’re Lochte, we suppose — thread of responses. Lochte later updated the post to read “9th birthday,” (evidence suggests Carter may actually be 10), but the damage had already had been done. 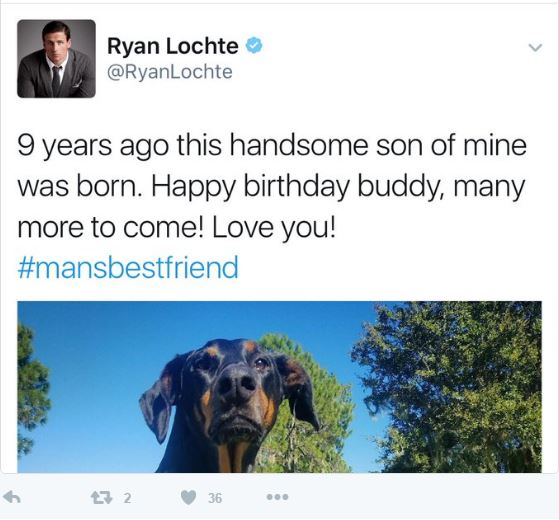 Here at LWD, we’ll give Lochte the benefit of the doubt on this one; we all wish our dogs would never get a day older. 🙂 #mansbestfriend, indeed!