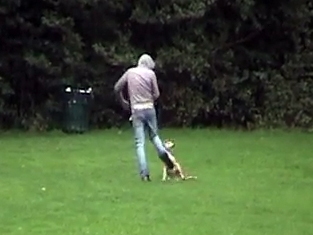 A man who was caught on camera viciously kicking a puppy has been sentenced to eight weeks in custody and disqualified from owning animals for five years – a good start, but does the punishment fit the crime?

As one of the first blogs to publish the video and get word of the incident to spread, it was our intent to follow this troubling story to its conclusion, and it would appear that we’ve heard the last of Arthur Kent for a while – but not nearly long enough.

Kent, of Welling, southeast London, was filmed by a member of the public in Knee Hill Park as he kicked his dog. Public outrage sparked an internet manhunt that eventually led Kent to turn himself in to Police. “They asked me how I could manage to kick a 12kg dog with such force. I’m ashamed and disgusted with myself and want to apologise. I would never hurt any animal.”

A vet who examined the animal noted signs of trauma. It was confiscated by police and turned over to the RSPCA. Kent admitted cruelty and causing unnecessary suffering to the pet. He was sentenced to eight weeks in jail and banned from owning animals for five years.

This is not Kent’s first run-in with the law: he was previously jailed for 18 months for robbery.