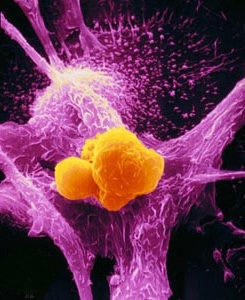 Researchers in Kyodo, Japan say a specially trained dog was able to sniff out biological samples from cancer patients over those of healthy people with at least 90 percent accuracy.

The findings by the team, which includes researchers at St. Sugar Cancer Sniffing Dog Training Center in Minamiboso, Chiba Prefecture, and Hideto Sonoda (an assistant professor at Kyushu University) will soon be published in the U.K. medical journal GUT.

In the experiment between November 2008 and June 2009, the researchers had the 9-year-old female Labrador retriever named Marine sniff samples taken from about 300 people. In a test using five containers with breath samples, Marine correctly chose a sample taken from a patient with colon cancer 33 out of 36 times, they said. In another test using liquid taken from feces, she chose the correct samples 37 out of 38 times, they said.

Marine’s training required getting her to recognize ingested food from the breath of a person in the belief she might be able to sniff out a disease based on odors inside the body, said center chief Yuji Sato. The dog also succeeded in sniffing out cancer of the breast, stomach and prostate, Sonoda said.

“She presumably reacted to a smell unique to cancers,” Sonoda said. “If we can identify the material causing the smell, it may lead to early cancer detection.”