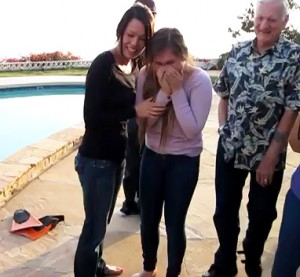 After four long years on the run, a dog once lost is found, and cameras were there to capture the emotional reunion with his family.

The Nakkim family is celebrating the return of their four legged friend. Chuck went missing from his Palo Verdes Estates home in 2007 after breaking out of his yard, prompting an exhaustive search that was ultimately unsuccessful. “He was gone. We looked everywhere. We drove up and down the streets,” said Lisa Nakkim, Chuck’s owner.

It was only recently that the family started entertaining the possibility of getting another dog, but fate had other plans for them. Just a few miles from their home, Linda Shelton was walking to work in Torrance when she noticed an emaciated dog wandering the city streets. She befriended him and brought him to her office.

“He was, I’m sorry to say, the smelliest dog ever,” Sheldon said. “I could see the potential in the dog. He just has a wonderful, big heart.”

A coworker of Sheldon was able to read faint markings on Chuck’s ID tag – and the subsequent phone call was answered by an incredulous Nakkim. “Every word that she kept saying I’m thinking, ‘Oh my gosh. Is this really happening? Is this really Chuck?'” Nakkim said.

A happy reunion took place at the Torrance city hall, and Lisa Nakkim said her daughter nearly fell apart when she recognized her long lost friend. “My daughter said, ‘Oh, we got a dog,’ and I said, ‘No, Lexa. That’s Chuck.’ She started crying. She just lost it,” Nakkim said.

The reunion of Chuck and his family can be seen in the YouTube video below. The once 100 pound dog was down to only 60 pounds at the time he was found, but is said to be packing on the pounds already, and his family couldn’t be happier. “He’s back 100 percent,” said Nakkim’s husband, Eric. “It’s like a lost member of the family coming home.”