Ahmeha Simmons is an 11-year-old girl from Little Rock, Arkansas.  She and her family are still waiting on a decision from a judge on whether or not they will be getting their service dog back.  According to mom Amanda Simmons, Ahmeha’s Asperger’s is regressing and making the family’s home life more difficult.

Yesterday, Pulaski County Jude Herbert Wright said he would be holding off on making the decision in an effort to get more information  He is requesting that both the defense and the city show documentation and reasons why he should be deciding in that party’s favor.  The interest in fairness is a good thing, however it’s making life rougher than it should be for a little girl and her family.

“Ahmeha is regressing and it’s kind of making things a lot worse on us at home,” Amanda said just after leaving the court room Monday.  “Since her service dog Edith was taken away, Ahmeha has been diagnosed as depressed.”

The Family’s lawyer, Clint Lancaster said that the issue is a tricky one, and quite unusual considering all involved.

“You know I think it is a very unique issue,” said Lancaster.  “It’s not something you see every day especially in a criminal case.”  Lancaster also said that there have been protesters trying to sway the judge in the family’s favor as well, and voicing their opposition to breed specific legislation in the city.

“If you do not make an accommodation in your BSL for service animals or emotional support animals, then you’re violating the FHA and the laws are very, very clear on that in our opinion,” Lancaster said.

Due to the judge’s call on Monday, this extends things for at least one more month, and Amanda Simmons is worried about what it is doing to her daughter.

Robert Bamburg, attorney for the City of Jacksonville declined to comment on the situation.  The next court date is set for February 7th. 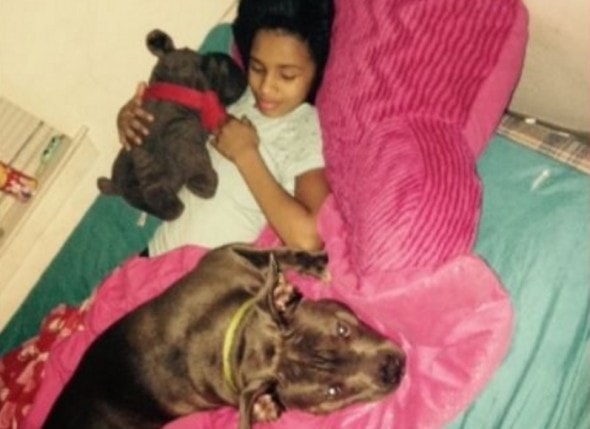