On January 1, 2015, seven men committed an unforgivable act. They captured a malnourished stray dog, attached explosives to his torso, and detonated them killing the dog. Al,l while video taping their criminal act to later post it on YouTube. Fortunately, the crime was reported and justice was served. 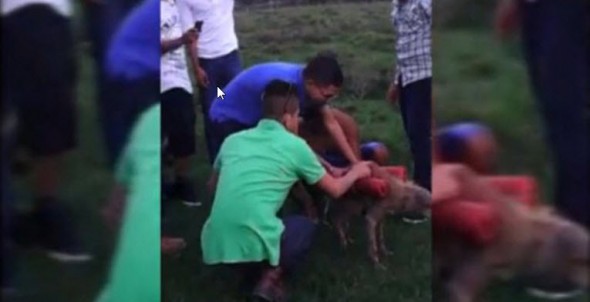 This cruel act happened in Yoro, Honduras, and the criminals were five under age males and two former members of the country’s armed forces.

Once the video was posted it went viral and animal lovers demanded justice. Authorities asked the public to help them identify the men in the video. Once their identities were known, the men faced the justice system.

On January 18th, all seven men were prosecuted and found guilty. They were fined and sentenced to three months of community service. This punishment is not what animal lovers were hoping for, it is not harsh enough compared to the brutal act they committed, but in a country where animal welfare is not a priority, it was surprising to see the justice system react and respond so quickly to the public’s demands for justice.

The newspaper La Pensa says this is not the first time these men commit such heinous act. The Facebook group “Team Racing” recently posted another video where the former armed forced members shoot another stray dog point blank.

Citizens are now demanding new laws to protect all animals against cruel acts, and harsher punishments for animal abusers.