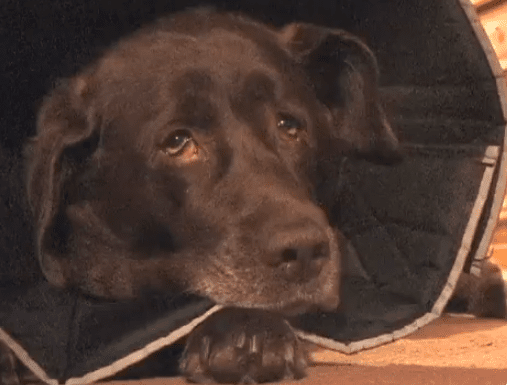 The verdict has been upheld in the case of the shooting of Brandi, a chocolate lab, by police officers. Back in April the jury had awarded $620,000 to the Jenkins family, $20,000 for veterinary bills and $600,000 for mental anguish, pain and suffering. The judge did reduce the veterinary bills award to $7,500 due to the fact Maryland law caps damages at that amount. The upholding of the $600,000 for emotional damages is huge not only for the Jenkins family but for the law starting to view pets not just as property.

The shooting incident occurred back on January 9, 2010 when police officers came to the Jenkins’ home with a civil warrant for their son, who no longer lived at the resident. Brandi bound out of the house to meet the officers when Deputy Timothy Brooks shot her. Brandi didn’t even get within three feet of the officer and had stopped barking when she was shot. Brandi did survive the shooting but will need extensive ongoing medical care. Brooks was found to have unconstitutionally shot and grievously wounded the dog by the jury. In addition Brooks along with Deputy Nathan Rector were found to have unconstitutionally and illegally entered the Jenkins’ home. The two officers entered the home without permission after the Jenkins had left to rush Brandi to the veterinarian.

Cary Hansel, attorney for the Jenkins was very happy with the result not only for what was awarded to the Jenkins but because of what the case means for the legal community. “It’s one of the first cases in Maryland to recognize that pets are family members and not property.” Normally, cases involving property would not be permitted to award emotional damages.