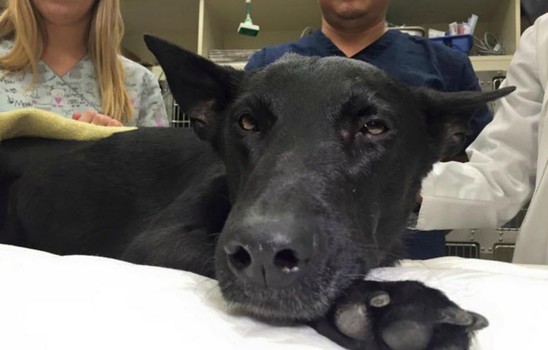 Robin is a Belgian Malinois and K-9 officer in Monterey Park, California.  After being stung multiple times by a very large swarm of bees, she almost lost her life.  Thankfully, organizations like Hemopet exist.  They provided the blood donations she badly needed to save her life.

There were more than 50 different places Robin had been stung by the angry swarm of bees.  She had been chasing down a suspect when the incident occurred.  She had taken so many stings, the venom delivered started to cause her organs to shut down.

She was going to need one heck of a blood transfusion.  Fast.

“She not only needed whole blood products, but she also needed some platelet products,” Dr. Jeff Patlogar with the Inland Valley Emergency Pet Clinic said.

This is where Hemopet becomes the hero.  It’s a not for profit organization, based out of Garden Grove, California.

Hemopet started back in 1999.  They were the very first of their kind in the United States, and continues to provide crucial dog blood donations and support to this day.

Starting off with vets using their own dogs for the blood donations, the organization has grown to a donor’s list of over 200 dogs.  There’s usually about 20-24 dogs every two months that get rescued by Hemopet.  Their adoption rate is almost exactly the same.  When they aren’t working a blood drive or doing rescues, they’re focusing on raising awareness of the need for more dog blood donations, and providing life saving blood for transfusions.

“We supply probably 40 percent of all the blood and plasma throughout the whole United States,” said Stalk.

It’s not just the United States that receives the blood.  They have helped out many dogs across the globe.  Sending blood off to many countries.

Hemopet veterinarian Doctor Adam Lassin said, “Through Hemopet, we can now reach across the world and you get someone that emails you from Australia, Hong Kong, you know, Europe, over somewhere in Europe and they say, ‘Hey, you know, we can’t thank you enough for your donation, it saved our pet’s life.'”

Robin still has a long way to go before she’s totally out of the woods.  However, thanks to the amazing dogs and humans over at Hemopet, things are looking up for her.  Her doctors do expect that she will make a full recovery, and even be able to return to full active duty as a police dog.

If you would like to find out more information, or ways you can assist Hemopet provide the amazing services they do, go to www.hemopet.org, or simply click here.