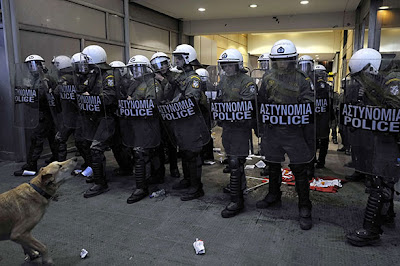 Greek reporters have pointed out a fascinating phenomenon while covering the recent riots in Athens. Since 2008 Kanellos has been turning up at protests all over the city. A review of pictures from two years of riot coverage show the dog barking at police, dodging water cannons, or taking the front line at student demonstrations. While ownership of the dog has not been established, one thing is abundantly clear: Kanellos has an issue with authority.

It would be hard to believe this story were it not for the mounting collection of photographs placing Kanellos in the middle of the action. He has become the mascot of protesters, and something tells me we have not seen the last of him.