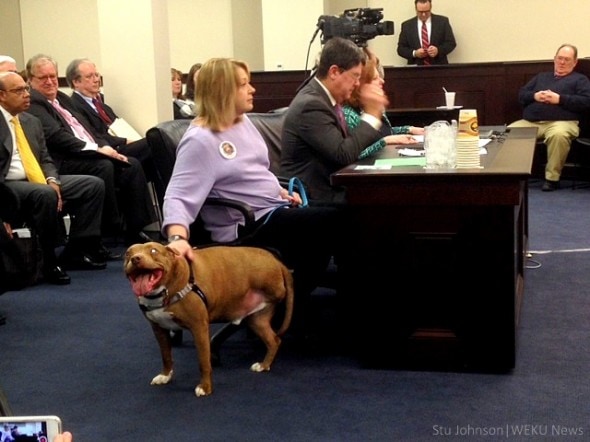 Kentucky, the state with the laxest animal fighting laws, may soon see a reinforcement to them.  A bill that would make it a felony to possess, train, sell, or transfer a dog for fighting purposes has passed in the House of Representatives, and will now move on to the Senate.

Proponents of the bill say Kentucky is the only state where possessing dog fighting paraphernalia is not a felony.  The laws are so lenient that many consider the state to be a “hotbed” of fighting activities.

House Speaker Greg Stumbo brought the proposal to the House Judiciary Committee, where it was approved and will now go to the full House.

House Bill 154 would make it a stricter felony to own, possess, keep, train, sell, or transfer “four-legged animals” for fighting.  Some are left wondering why the bill is specific to four-legged animals when cock-fighting rings have surfaced in the state.

“No, I think the federal law took care of cockfighting.  I’ve got a couple of distant, distant cousins who are serving time on that very issue right now,” Stumbo said.

His bill is referring specifically to four-legged beasts because people have been known to fight dogs with bears and hogs.    But Rep. Johnny Bell says all animal fighting for gambling is barbaric, regardless of how many legs they have.