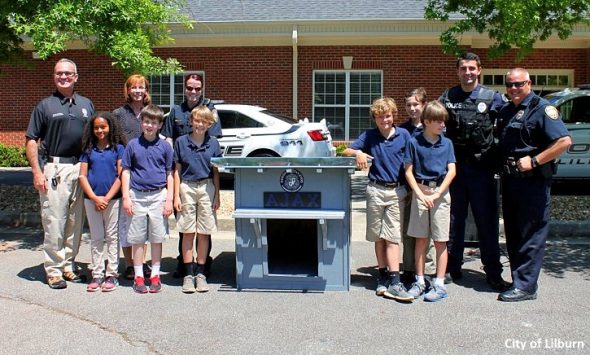 The city of Lilburn, Georgia has just acquired a new K-9, and to give him the best welcome possible, a class of fifth-graders built a dog house for him.

Ajax, a one-year-old Belgian Malinois, will be on the force soon, but first will complete a training course in North Carolina with his handler, AJ Ajanovic.  A group of students from Parkview Christian School presented him with Ajax’s new digs on Tuesday.

“I believe these fifth graders have learned some life lessons they’ll never forget,” Principal Cindy Nation said at the unveiling ceremony. “And to quote one of them, they will never look at a police officer the same way, and I think that’s due to the relationships that your officers have built with these students.”

She believes the project has helped the students develop a positive relationship with local law enforcement.  The Lilburn Police Department thanked the kids for their generosity.

“Even though this is the end of a project, it’s actually the beginning of bigger works to come, because these fifth-graders are going to continue to do things to help other people,” Community Relations Officer Mike Johnson said.