On August 21, 2014, a Pit bull mix gave California drivers an evening to remember. The pooch was running loose on the 710 Freeway and Los Angeles area commuters joined forces to rescue the dog, avoiding a tragic accident.

Luck was on the dog’s side. Thanks to rush hour, cars were not driving at their usual speeds. Many drivers slowed down even more and tried to corral the pet on one side of the road. A motorcyclist tried to herd the dog away from danger.

The hero of this rescue is Andie Valerio, who courageously got out of her car and ran down the highway after the dog. 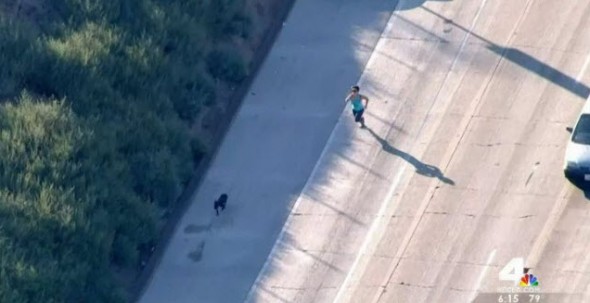 “[I ran] just to save the dog, I didn’t want her to get hurt,” Valerio told NBC Los Angeles.

The dog is a female Pit bull mix, and apparently seems to have had puppies recently. She was wearing a purple collar and authorities believe she is someone’s loved pet.

Valerio scooped up the freeway dog and took her home. Later, animal control officers picked up the pet and took her to the Southeast Area Animal Control shelter in Downey, Calif. Se was scanned for a microchip but none was found, and the collar did not have ID tags attached. 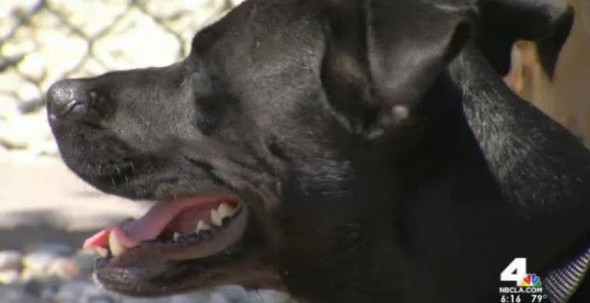 Authorities hope the pet’s owner comes forward and claims the freeway dog, but in the event her rightful owner does not come looking for her, many area residents have already expressed interest in the dog and inquired about adopting her.

“Hopefully today we’ll get a call [from] someone who’s seen it on the news,” said animal control officer Robby Gochicoa.”