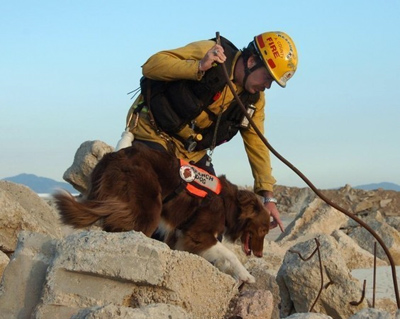 Freezing temperatures, snowfall and lack of electricity did not deter a team of 74 Los Angeles County Fire Department firefighters from carrying out an ongoing and difficult search and rescue mission this week in and around Ofunato City, located 330 miles north of Tokyo.

“The debris piles are 30 to 40 feet high,” Stone said. “There are vehicles on top of houses. There are lots of configurations for where people could be trapped.”

He added, “Rescue people are climbing on top of cranes, and debris piles are not stable. What nature can do is almost mind-boggling.”

Large tsunami waves caused by the earthquake completely wiped out towns and villages along the northeastern coast of the country. As of Saturday, the death toll was at more than 7,000, and more than 11,000 people were missing. 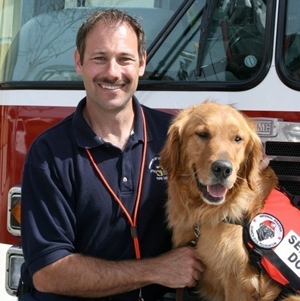 The United States Agency for International Development, a government agency that provides humanitarian assistance overseas, dispatched the firefighters to Japan two days after they returned from an earthquake rescue mission in New Zealand. The California team was joined by firefighters from Fairfax, Va. and the United Kingdom.

Also, the National Disaster Search Dog Foundation dispatched six search and rescue dogs to look for survivors in the debris.

The firefighters and search dogs arrived at the U.S. Misawa Air Base in northern Japan March 12. From there, they traveled six hours south in military vehicles to Ofunato City. The California and Virginia teams carried 45 tons of equipment, and they can function self sufficiently for up to 10 days.

The firefighters and search dogs have not found any survivors, said L.A. County Fire Capt. Marc Savage, who is based in Los Angeles, but checks in frequently with the team in Japan.

“Things are looking difficult,” he said. “These places have just been leveled.”

Still, the firefighters and dogs have maintained their morale. They will continue to search, Stone said, and they are not sure yet when they will return to the United States. 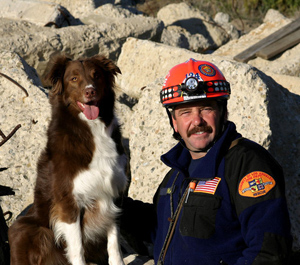 “They worked in the rain and snow, and stayed in a school gymnasium with the other international firefighter teams,” Stone said. “They brought their own food, water, shelter, heaters and shower facilities, and turned the gym into a mini-city.”

The dogs, who were rescued from shelters, have been trained to bark if they find a victim who needs rescuing. Each one is paired with a firefighter handler from the Los Angeles area.

“The dogs and their handlers are inseparable,” said Janet Reineck, spokeswoman for the dog foundation.

Paramedic Jasmine Segura of Redondo Beach has worked with her black lab Cadillac since 2007.

“He’s very calm until he sees a toy,” Segura said. “Then he becomes very driven, and would go through a brick wall to reach that toy.”

Segura and Cadillac spent 16 days in Haiti after the earthquake there last year, and they searched for survivors in massive amounts of wreckage. The team, along with the six other canine disaster search teams, helped find 12 victims under the concrete and debris in Haiti. 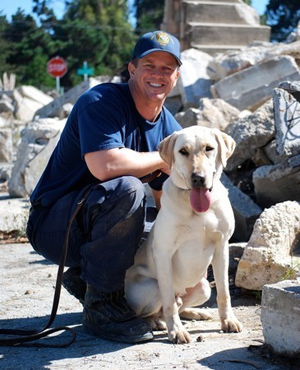 Part of the reason no survivors have been found this time, Stone said, is that Japan’s robust earthquake and tsunami-warning system notified many residents 13 to 15 minutes before the destructive waves came.

“The early warning sirens went off, and people were able to move to higher ground,” he said.

Many others perished when the water engulfed complete areas, and knocked over homes. Some of those bodies have been recovered.

“There’s a good partnership between local and international teams,” he said. “We’ve been working with so many people and responders.”

Firefighter Gary Durian said about the rescue effort, “Task Force members remove a layer of debris after it is searched, and then we work the next layer.”

Savage said, “The hand that’s been dealt to the rescuers is a challenging one. They’re exposed to the elements, and it’s a dire situation. We’re monitoring the radiological materials very closely.” 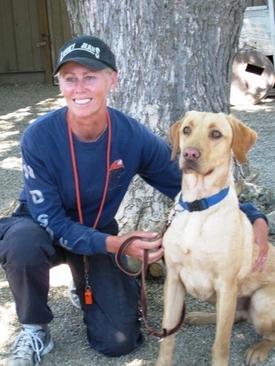 The firefighters use dosimeters to measure radiation levels, Stone said. They have not been exposed to the radiation released from the Fukushima nuclear power plant reactors, which are located 150 miles to the north of Ofunato City.

Stone added that the freezing temperatures and the snow have posed a new challenge.

“This is the first time we’ve worked in cold weather,” he said.

On Thursday morning, the school where the firefighters are staying invited the team leaders to attend the sixth-grade graduation. Even in the face of such adversity and hardship, the students made it back to school for the first time since the disaster struck.

“There is a high amount of resolve among the people here,” Stone said. “They are very respectful and are trying to sort things out.”

For more information and updates from the National Disaster Search Dog Foundation’s search and rescue work in Japan, go ﻿here﻿.