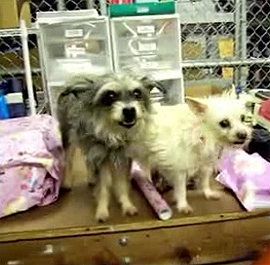 An L.A. based businessman has elected to have his cherished pets cloned by a company in South Korea – and is spending $310,000 to do it.

Peter Onruang told KTLA that his terrier mix, Wolfie, had been his best friend before her death at age 15 in 2009. At the time, Onruang was considering cloning, and had genetic material of Wolfie (and her sister Bubbles) preserved, just in case.

Onruang’s dedication is unquestionable – he went so far as to found a new business for the express purpose of funding the cloning procedure. A few years later, Hollywood Paintball has grown and become successful enough to cover the the cost of cloning for both dogs, and a South Korean company hired to manage the cloning now awaits the births of Wolfie and Bubble clones.

Pet cloning remains a controversial topic – opponents say that the cloned dogs are not exact replicas of the original, and that the cloning business will only hurt the chances of adoption for shelter dogs.

Onruang disagrees, however,  and says he is comforted to know that while he may not actually have Wolfie and Bubbles back, thanks to technology, he’s as close as he can get to the real thing.