Dog lovers in Texas, the state in which everything’s bigger, should fall in love with this handsome gentle giant! His name is Stevie.

Sweet Stevie was surrendered to animal control officers in Livingston, TX, after he grew to be larger than his family was expecting. After awhile, though, his clock ran out, but just when he was next in line t be euthanized, a kind person intervened and brought him to the folks at the SPCA of Polk County.

Staffers there estimate that Stevie is about 7-and-a-half years old, but no medical expertise is needed to asses that he’s also a sweet, lovable retriever mix who really deserves a second chance to find a loving forever home. 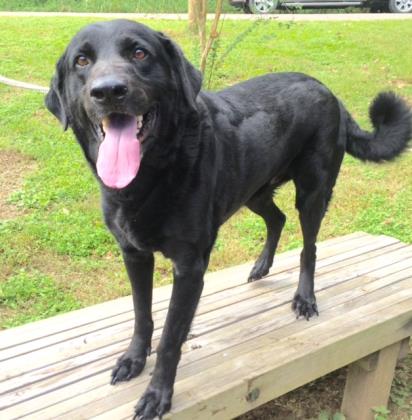 In fact, the SPCA thought they’d found him a perfect love match, but sadly, fate again dealt Stevie a cruel hand. When the family’s situation changed, they returned him to the rescue.

Upon his arrival, SPCA doctors checked Stevie over thoroughly and found four (4) relatively large masses on his body. One of these masses was a large and hard; it sat on his right shoulder. Thanks to help from the Grey Muzzle Organization, necessary funds were secured to have the masses removed immediately.

Three of the masses were determined to be benign at this point but had the potential of becoming cancerous in the future. The large, hard culprit on his right shoulder was indeed cancer, but the veterinary staff believes that the operation was a complete success and all the malignant tissue was removed. That means that Stevie’s prognosis is excellent and whoever adopts him will likely enjoy many wonderful years with an outstandingly sweet companion!

Without the medical funds provided through the Grey Muzzle Organization grant, we may not have been able to secure medical treatment in time to save this sweet dog’s life and prevent him from future suffering. They know that senior lives are worth saving. So does the staff down at the SPCA of Polk – and they’re hoping someone else sees that, too.

Let’s help this big boy find a great new home to enrich with his bigger-than-life love and gentle, sweet spirit.