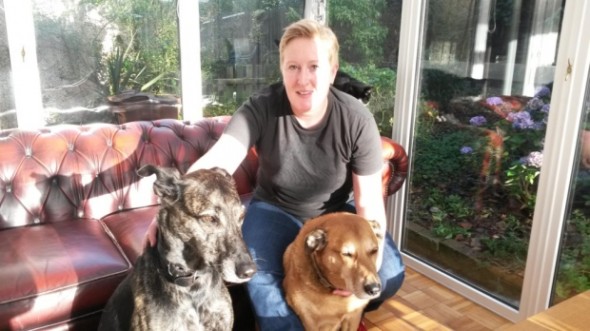 Rescue dog Finn was out on a walk with his human one day when tragedy almost struck. His spleen ruptured, and he needed a blood transfusion, badly.  His sister Sally was there to help him with that, but if she hadn’t been around, things may have been very different.

Finn and Sally’s human, Lesley Duncan knew something was up with Finn on that walk they too that day.

“He is an active dog, always has been, and he was off chasing the other two when we were about halfway around and suddenly it was like someone pulled his batteries out,” said Duncan. “He just stopped running and looked at me. I knew something was wrong.”

Within a few short minutes of noticing something was up, Finn couldn’t walk.  He had to be carried out of the park by Duncan.  She got Finn to the Westport Veterinary Clinic in Linlithgow, West Lothian, United Kingdom.

“By then, he couldn’t lift his head.  I was really, really upset,” said Duncan.  “They said it looked like he was bleeding inside and needed a transfusion.  They were phoning around dog owners trying to find someone with a dog over 25kg who could give a transfusion.  I don’t think he would have lasted another half an hour.  He was pretty much away.  Then the receptionist said: ‘What about your other dogs?’  I’d been in too much of a panic to think.  Ruby was too light but Sally was OK.”

A tumor was removed from Finn’s spleen, and thanks to his sister, he got the blood he needed.  He made it through, luckily.  However, the situation raised presented a problem to Duncan and many others involved.  What if this were to have happened to someone that DIDN’T another dog that could provide blood?  What would be the outcome then?

The UK does have the Pet Blood Bank, but it’s not exactly the most wide-spread service available in the UK.  Sometimes, be it due to “business hours” or a simple lack of availability, the service isn’t as efficient as maybe it should be.

Veterinarian Stuart McMorrow, one of Finn’s surgeons, said, “That’s a brilliant service and we have referred dogs there who need blood for chronic conditions.  But I had an emergency a while ago at six o’clock in the evening where I had to remove half a dog’s liver – if we’d had to wait for blood to come around the bypass from Edinburgh at that time, the dog would have been dead.”

Dogs are unique when it comes to donations of blood.  For the most part, it’s not like humans, where someone that is blood type AB, needs type AB blood.  A dog can take pretty much any other canine blood.  So because of a couple of close calls, and more specifically because of Finn, McMorrow is starting a canine blood bank right in his own practice.

Duncan hopes that this new dog blood bank will be Finn’s legacy.  They may have removed the tumor from Finn and helped him live a bit longer, but unfortunately his cancer is malignant.  His time may be short, however the experience he had at Westport Veterinary Clinic mat help save many, many lives.  How much more of a lasting legacy could one ask for?

“He’s got about six months to go,” said Duncan.  She plans to use that time she has left with him to ensure that his last days are as epic as they could possibly could.

“You don’t want to short-change them,” said Duncan.  “And everyone should have a dog like Finn.”