Whether human or dog, one thing holds true for the both of us:  you have to learn how to walk at some point.  We all learn at different rates, and sometimes we’re born with issues that make it hard, if not impossible, to learn how it works.  At the end of the day, it’s just a necessary part of life.

So that’s how we come to Brutus’ story.  He’s the only the second dog known to have been fitted for prosthetic limbs on all four limbs.  He’s been learning to use them since September of 2014 with the rears.  A month later, he was fitted for the fronts.

Laura Aquilina is Brutus’ foster mom, and she walks him around the block, the same you would any dog.  However, what may seem like something just about anyone could do easily is not always the case.

“He just has these little peg legs to get around on and he does a pretty good job inside the home,” said Laura.  “You can’t explain to an animal why you are putting these contraptions on their feet. You can’t explain to them, that it’s to help them.” 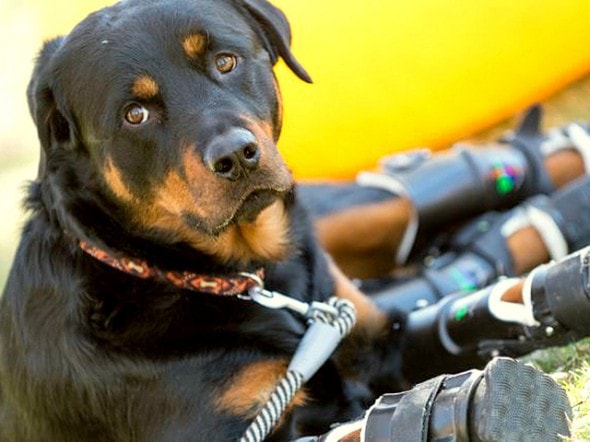 So Laura has been easing Brutus into his new limbs.  There’s a lot of exercising and play included in Brutus’ day.  It goes a long way to assist him in learning balance and many other skills needed to use his new limbs properly.

“He’s able to walk in them. It’s not always pretty. We want to be able to give him a higher function, where he can run and play with other dogs, go on hikes,” said Laura.

If you’re wondering how Brutus ended up needing four specially designed limbs, it was thanks to a breeder.  This person not only managed to allow Brutus to get frostbite on all four legs, he decided to be helpful by amputating the damaged limbs himself.

The limbs Brutus is getting used to come from OrthoPets.  The Denver-based company heard about Brutus’ story. 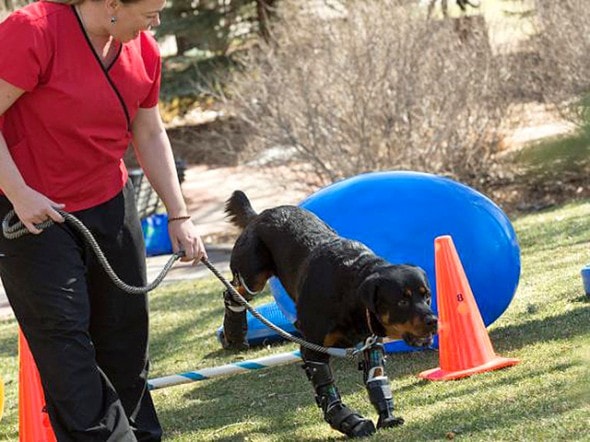 “Brutus is an amazing case of a beautiful dog who was dealt a short hand,” said Martin Kauffman, founder of OrthoPets.  His company makes limbs for about 250 animals a year worldwide.

“He can get out and do normal doggy things. And it just makes you feel so good,” he said.

Laura is very glad for OrthoPets and all of the help and love they’ve shown Brutus.  She knows that had someone not go to him before he ended up at some random shelter, he may not be around today to be an inspiration for other animals with disabilities.

“If he ended up in a shelter they’d say he was unadoptable because he’s missing his feet. I think it’s good for people to know we can work with animals like this,” she said. 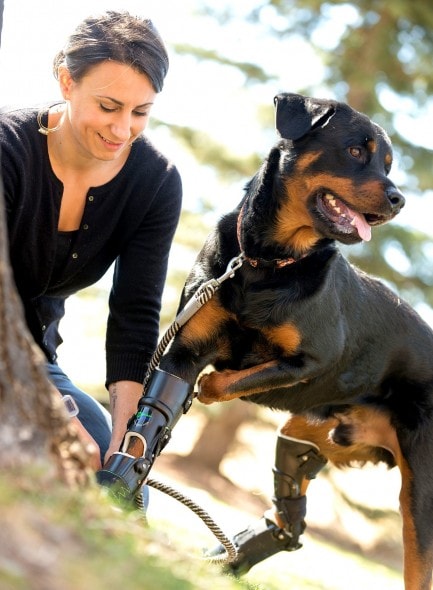