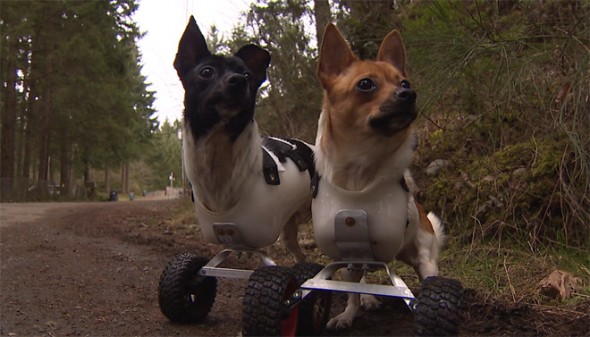 A pair of disabled fox terriers were abandoned and left to fend for themselves on the doorstep of an animal shelter, but now they are thriving with their new supportive carts and are looking for someone to call them family.

The brother and sister pups were dumped at a California shelter, and were transported to the Valhalla Canine Rescue in Graham, Washington, which has been their home for the past year.  They used to be called “Slip” and “Slide,” but have been renamed “Honey” and “Badger” since they received new carts in lieu of legs.

“They do get along quite well without (the carts),” said Patty Mauldin with Valhalla Canine Rescue.

Honey and Badger can hop around on their hind legs like bunnies, but are moving much better these days.  A prosthetic company in Olympia fitted them with carts that are designed for dogs missing their front legs.  They had previously been donning bulky rear leg carts. 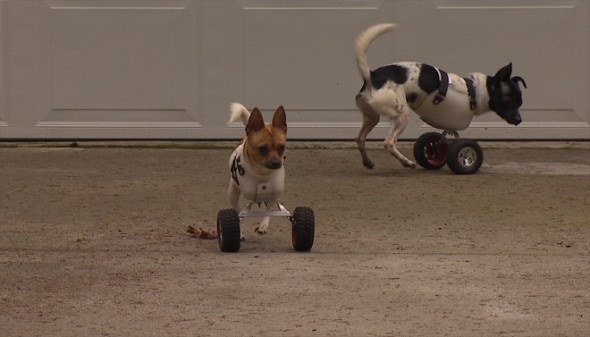 Despite their hopeless beginning, the siblings are flourishing.  They would do even better in a home, but these dogs come as a set.

“They’re terribly bonded – breaking them up is really not an option,” Mauldin said.

She says the dogs have gone through hydrotherapy, and would quite therapeutic to others.  Valhalla is even willing to pay for their training to become therapy dogs.

“The kids forget going through chemo or having other problems because they see dogs in cars and they want to play with dogs in cars,” Maudlin explained.

Also available for adoption at Valhalla is a 15-week-old Great Dane puppy that was found in a dumpster.