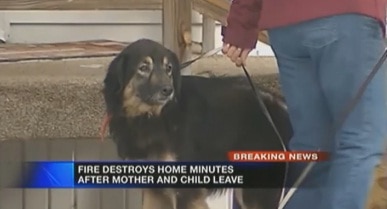 A mail carrier is being hailed as a hero after she pulled a dog from a house fire and brought him back to life.

Jo Amerson was delivering mail at about 10:30 this Friday morning in Evans City, Pennsylvania when she noticed that one of the homes on her route was on fire.  She knew that a mother and her three-year-old daughter lived there, and immediately began to panic.  Fearing that the residents might have been trapped inside, she began pounding on doors and windows.

When no one responded, Amerson began smashing windows and screaming to alert them.  That’s when she saw the family dog, unconscious.  Risking her own life, she dashed inside, grasped him by the collar and pulled him to safety.   But the dog wasn’t out of the woods yet – he wasn’t breathing.   The intrepid mailwoman then performed CPR on the dog and brought him back to life.

Thankfully, the woman and her daughter were not inside.  They had left for a doctor’s appointment only minutes before the fire broke out.  The cause of the fire remains under investigation.  Sadly, the family lost everything they owned in the fire, and they do not have insurance.  But thanks to one gallant mail carrier, they still have their beloved dog.