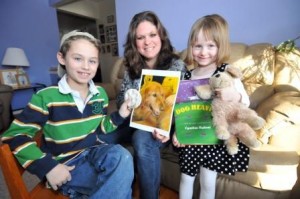 A family who recently had to euthanize their 9 year old golden retriever is expressing gratitude to the postal workers who went out of their way to show unexpected kindness and help mend the broken heart of the family’s four-year-old daughter, Anna.

Anna Baker sat in her family’s car in the parking lot of the veterinary clinic while her parents and brother said good bye to their nine year old dog, Jack.  Cancer had eliminated any possibility for recovery, and Ted and Rebecca Baker showed mercy by ending Jack’s suffering, choosing to have him euthanized before the disease completely overtook him. Their son Daniel, 8, was with them for Jack’s final moments.

“When we came back into the car,” said Anna’s mom, “she realized Jack wasn’t with us. I think she expected Jack would be back in the car with us and be better.”

That night, her parents tried to console her as she cried herself to sleep. Anna told them that she wanted to write Jack a letter before drifting off. The next morning, she did. Anna drew a picture of her family, placed it in an envelope addressed to “Jack in Heaven”, and followed her mother to the mailbox to send it just as their letter carrier (known only to them as Amanda) arrived, noting the recipient and placing it in her mail bag for safe delivery.

The Bakers were completely surprised when a couple of days later, a U.S. Postal Service supervisor who only identified himself as Dave arrived with a box bearing the words, “From Jack in Heaven.” 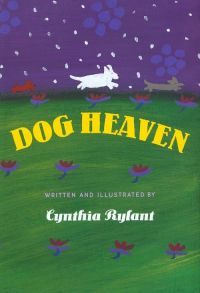 Once opened, the contents reduced Rebecca Baker to tears. It contained a Dear Anna letter, “written by” Jack. “Although my bed isn’t as comfy as yours, I want you to know that I am OK in the safe hands of God. I was very happy to receive the picture that you made for me,” the letter stated.

Jack’s letter explained that he had made it safely to the other side of the rainbow bridge, where he and the other dogs chased mail carriers with bags full of Milk Bones, played ball and swam all day.

“I miss my family and I miss you,” the letter said. “God sends his blessing and wants you to know that he loves you very much. We will be watching over you every day. Love always, Jack.”

Included in the box from Jack was a book about how to cope with having your best friend put down, and a miniature stuffed golden retriever.

The bakers have been deeply affected by the kind gesture.

“I was so touched that somebody we don’t know would care so much about my child and what she’s going through, that they would do something like this to help her.  Those people have touched me like I can’t even express.  She really believed this came from Jack in heaven,” Rebecca Baker said.

Anna now carries her new stuffed dog everywhere. Asked if she has named it, her answer comes as no surprise.

75 thoughts on “Letters from Heaven”