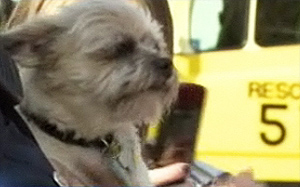 Thanks to an act of bravery on the part of a neighbor, a lucky dog named Howard will live to see another day.

The story broke over the weekend and details are limited, but neighbors say the fire started in the back of the Omaha home and quickly spread, engulfing the exterior and attic of the house in flames.

No one but Howard was home at the time, but an unnamed neighbor was aware that the family had a pet dog, so he broke into the burning residence and located Howard, emerging from the blaze to the cheer of neighboring residents, the frightened pooch clinging to safety in his arms.

Officials say an investigation is underway to determine what may have started the fire.