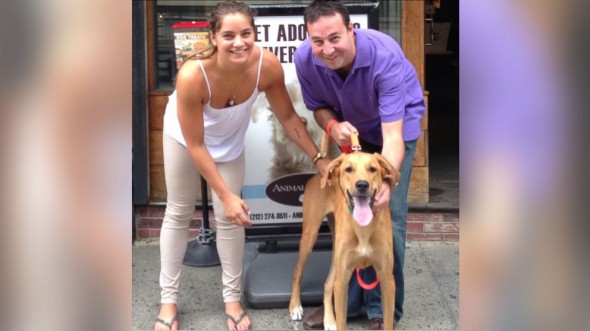 It’s like online dating—except for people seeking dogs or cats or chinchillas or whatever else may be the pet perfect for them.

How much is the online experience like using eHarmony, say, or Match.com?

“It’s exactly like using Match.com,” says Darrell Lerner, who ought to know. Before he founded pet-finder site Allpaws (which currently has 82,960 pets awaiting adoption), Lerner co-founded SNAP Interactive, the developer of AYI (Are You Interested?), a dating application on Facebook with, he says, some 70 million installs.

Allpaws, says its website, “Takes online pet listing in a new and exciting direction by offering an online dating style interface complete with advanced search tools.” Those include some 30 different search filters, Lerner tells ABC News. Adopters (we hesitate to call them “early adopters,” although the site launched only this past January) can search by type of pet, breed, location, gender, age, size or friskiness. You can search for a bird who’s great with children, a senior cat or a special-needs chinchilla. The site lists over 49,000 dogs, over 31,000 cats, 1,208 rabbits and 272 horses—not to mention 658 animals “small and furry,” 79 that hail from the barnyard and 238 slitherers and other assorted reptiles.

Peters tells ABC News the site lists some 50,000 puppies (from 300 different breeds), some priced as high at $3,000 per pup. The site makes money by charging breeders a flat fee. It exists only to connect buyers and sellers. From there on in, it takes no further role in the transaction.

The site, says Peters, was the target of scammers some years ago—people falsely claiming to be breeders, many doing business from overseas. They would list puppies for sale and collect the money. Then Fido would not be forthcoming.

Such scammers, in their sales blurbs, would tell heart-tugging tales explaining why they had to sell their Dalmatians at fire-sale prices, he says. The cons were cousins to those now in circulation, for example, where a man trapped in the Cairo airport promises to send you a check for $1,000, if only you will wire $350 so he can get a new passport.

PupyFind, Peters says, has since installed security software that makes such scams harder to perpetrate.

The self-described editor, guru and broadcaster–founder of a website that delivers sports news to women (BabesDigBalls)—says she had always wanted a French bulldog. She calls finding the right dog online a higher-risk proposition than online dating. “With a puppy, you’re putting money down,” she explains.

“I wasn’t even sure the dog would show up.”

But he did. And Elvis (so-named because he has a cleft lip) has since turned out to be “an amazing dog.”

His lip was not a defect in Furtado’s eyes, since it made him a cheaper buy than a Canadian bulldog would have been. “Here, they’re really expensive.”

Elvis is the best dog she has ever had, says Furtado. “I couldn’t be happier.”