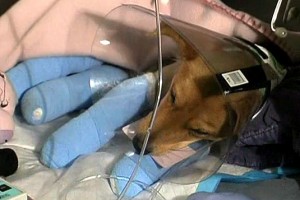 This is an atrocious story with a very happy ending, and for those who recall the events surrounding the dragging of this dog in November of last year, the transformation you are about to see is staggering.

On Nov 3, 2009 Jimmy Lovell was arrested for dragging this little 17-pound terrier mix behind his truck on the streets of Knoxville,TN. This dog is now known as “LBD” (little brown dog). Authorities allege that Lovell dragged the dog for several miles behind his truck. Police were told that several people attempted to stop the driver before he stopped near Middlebrook Pike, got out, walked toward the back of the vehicle while cursing at the witnesses, jerked the dog off the ground, removed the rope from the truck, threw the bloody dog into the passenger side of the vehicle and drove away. The dog was found shortly thereafter on the side of the road, barely alive.

This is the first clip I’ve come across that chronicles so much of the journey that this courageous little Terrier has been on in just one year, and the veterinarians involved in her care are to be commended for her recovery.