Sydnee O’Kelly from Spokane, Washington has a rare disorder that can complicate her and her family’s life considerably.  Having Dravet Syndrome causes extreme bouts of seizures, even while she is sleeping.  Her mother knows that a service dog can detect these seizures, sometimes far before they happen.  However with all of the medical expenses and everything else that goes into keeping a family financially afloat, the cost of one is just out of their reach.

So when the Crew of Fire Station 13, they did what comes naturally to these often times self sacrificing people, and came to Sydnee’s rescue.  Knowing that a service dog is very expensive, they have set out to raise enough money to get her a dog that will be far more than just a little girl’s best friend.

Sydnee’s family has set up a GoFundMe.com page to help, but the crew at the fire station are doing everything that they can think of to help.  They have started a clothing drive called Clothes for the Cause.  For every pound of textiles donated, money is given back to the fund for the service dog.  The goal is to have a total of 250 large bags of clothes by May 2nd.

Fire station member Brian Schaeffer said, “My hope is that we can make the $10,000 goal so that they’ll be able to go, get the dog, marry them up and have a really good life together.”

For now, the campaign is still on.  There may not yet be a cure for Dravet Syndrome, but the amazing people that are members of Fire Station 13 know that with this service dog, a little girl can live a bit easier.  If you’d like to donate to Sydnee’s fundraiser, you can click here to go to the GoFundMe page.

Sydnee’s family is just overwhelmed with the amount of support that they have received, both from the community and from Fire Station 13.  Sydnee is even an honorary member of the firehouse, and gets to visit their with the fellow firefighters regularly. 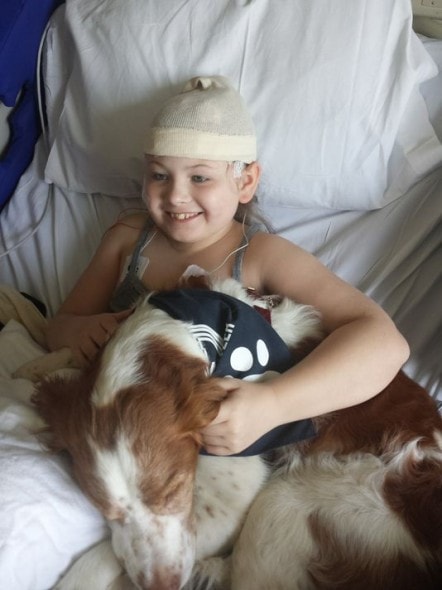