Eragon, a Chihuahua from London got lost this past August while out on a walk. His owner Samantha Jones wanted nothing more than to find her dog, unfortunately she never found him, yet as a true Christmas miracle, Eragon was found inside a Santa sack just nine days before Christmas. 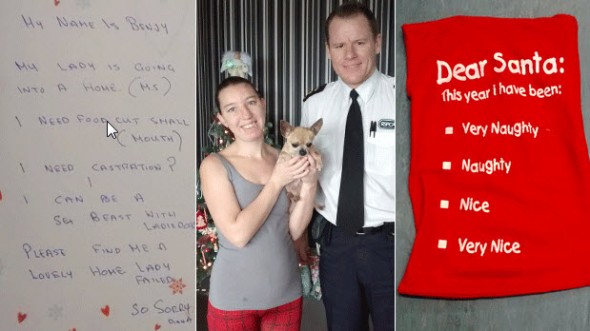 On Dec. 16, 2014, a group of children attending mass service at St Mary’s Church in Hitchin, England, came upon the sack. Inside the bag was the little dog with food, treats, a jumper, and a Christmas card.

The card said the dog’s name was Benjy and his owner, an older lady, was going into a home. The note ended with “please find me a lovely home.”

Benjy was taken by the RSPCA but when he was scanned for a microchip, officers learned that Benjy was actually Eragon and he had been missing for four months. The RSPCA contacted Jones, who was more than happy to get her little Chihuahua back home.

“I thought I would never see him again,” Jones told BBC News.”I was especially shocked to find he was in Hertfordshire – quite a way from my London home.”

RSPCA inspector Stephen Reeves believes Eragon was well taken care off by whoever had him the past four months, however, the way he was disposed off was not the best. The tiny pet could have easily suffered hypothermia due to the current cold weather. Luckily, Eragon was found in time and he is now back where he belongs, with his rightful owner, Samantha Jones.