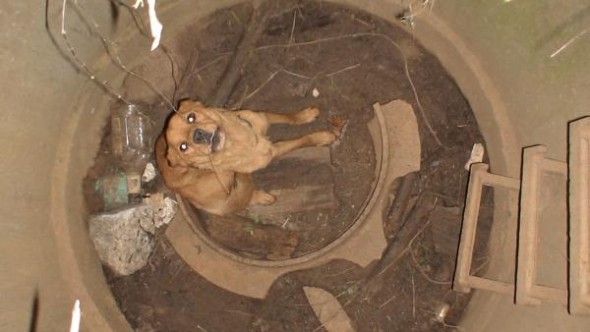 One dog headed for certain death got a second chance at life and a happy reunion with her owner after a harrowing three week experience. On August 26, Clayton, Georgia resident Richard Hahn had the chance to be a hero when he heard the distressed growling of a dog coming from inside a manhole. Sergeant Tim Brown and Officer Richard Hunter responded to Hahn’s 911 call. After striking out with the local Animal Control, the officers spent part of their Sunday shift rescuing the lab mix themselves.

In a MacGuyver-esque manner, the police rigged a cup of water to a long pole and lowered it down to the parched pup. Seeing how scared she was, they did not want to put themselves in the manhole with her. Brown and Hunter carefully lifted the dog out using a looped pole designed to unlock car doors.

“It makes you feel really good to save one of God’s animals,” Sgt. Brown said of his experience.

Facebook was a contributing factor in the reunion of owner Steve Carruth and his dog, Phoebe, after their three-week estrangement. A city official posted a picture on the website of the then unknown dog after her heroic rescue. Officers believe that she subsisted solely on rain runoff, raw sewage and vegetation during her entrapment, losing almost half of her body weight.

“I am grateful she was found and that the officers were able to get her out,” Carruth stated.