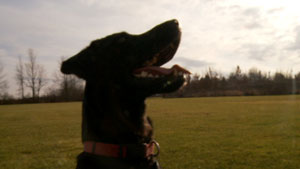 When Colin Baxter woke up in a ditch, his leg and ankle were broken and he had no idea know how he got there. What he did know was his 2-year-old black lab Ozzy was by his side. Ozzy not only comforted Baxter but helped Baxter’s family find the injured man.

Baxter and Ozzy were walking from their home in Oxford Mills, Ontario to a neighbor’s house on Friday night. They never made it there. Baxter has no recollection of what happened, but he was knocked unconscious and when he woke up his head was bleeding, his left femur and ankle were broken and his right knee was dislocated. Ozzy was by his side. “He would have been traumatized just by the fact that I was non-responsive on the ground, but he did stay with me,” said Baxter.

When Baxter’s nephew was driving along the road he spotted Ozzy and stopped his car. It wasn’t until he pulled over and stopped his car that he saw his uncle in the ditch. Baxter was taken to the hospital, where doctors are treating him and suspect he was a victim of a hit-and-run. “You’re not likely to break a femur falling into a ditch,” said Baxter.  Police are investigating the incident while Baxter will remain in the hospital as he will undergo additional surgery this week.

If Ozzy hadn’t stayed by Baxter’s side things could’ve been a lot worse. Rob Baxter, Colin’s son, believes his father is lucky to be alive thanks to Ozzy. “He had a lot of things going for him in terms of luck that night, but the big one was if the dog wasn’t there – if he got hit or scared and ran off – I don’t think anybody would have noticed or seen him.”