Forgotten by his owner, a dog accidentally left behind at a Missouri rest area proved his dedication to his master by sitting patiently for two days, awaiting his return.

The 9-month old Yorkie pup made national headlines today after being found by an animal control officer, planted firmly where he had been left. Distraught at the discovery that his pet was missing, the dog’s owner had called the closest animal control facility, desperate for help.

Michael Siau, a truck driver, had paused for a break at a rest stop near Hannibal, Missouri when his Yorkie escaped the cab of his truck.  When he pulled away, Rambo was inadvertently left behind.

“Didn’t even cross my mind that he might jump out, he never has before,” Siau said. “I jumped back in the truck, put it in gear and drove off. And I just thought he was in the back asleep.”

Distracted by driving, Siau said he panicked when he noticed Rambo was missing. He was in Cedar Rapids, Iowa when he realized his companion wasn’t in the cab, and was conflicted: because his truck operated on a timer, he would lose his job if he turned back to retrieve Rambo.  Concerned for his lost companion, he called the LaGrange police department. They assured him they would look into the matter. Two days passed with no word. 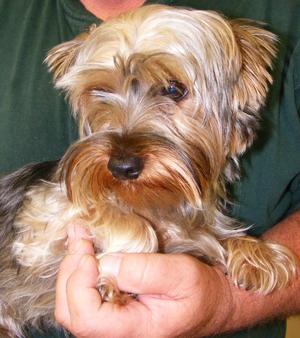 “I was in tears, sobbing, calling that same police department in LaGrange back Sunday morning because nobody had returned my call,” Siau said. Rambo had been given to him by his daughter to help him cope with the death of his father, and the thought of losing his four-legged copilot was unbearable.

When he called police seeking an update, a dispatcher referred Siau to Hannibal’s Animal Control unit. He explained the situation and they assured him they would send an officer to the rest stop. A few hours later, officer Tim Ledbetter said he was surprised to find Rambo ‘just sitting there patiently’, waiting for Siau to return.

“Three hours later, 10:30 Sunday morning, the officer called me and told me they found my dog,” Siau said.

Siau was reunited with Rambo today at the Northeast Missouri Humane Society, and was surprised to learn that had the animal control officer been a minute or two later, Rambo would likely have been gone. Ledbetter explained that he had met a family who had stopped at the rest area, and they told him they were planning to adopt what they thought was an unwanted dog.

“In about 60 seconds, he would have been gone,” Ledbetter said.