It’s a bittersweet moment for Shorty and his two families who both love him dearly and want only the best for him.  The 15 year old dog who was found wandering on a road in Carrabus County North Carolina, hails from New Orleans.  In the wake of Hurricane Katrina, his family couldn’t care for him and surrendered him to a shelter to ensure he would be cared for. He was eventually adopted by Oclisha Miller and has been like a child to her ever since.  Two weeks ago he wandered away from home and got lost. 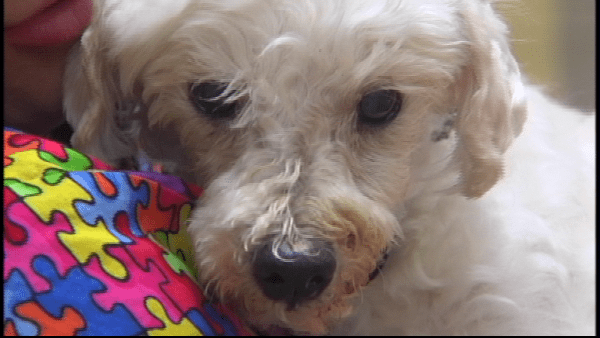 When he was found, a microchip was discovered which led veterinarian Dr. Blake Peurifoy at the Cabarrus Animal Hospital to contact his original family, who were elated to hear that he had been found.  At the same time, Oclisha Miller and her granddaughter (who did not know about the microchip) were searching desperately for Shorty  when they were alerted by their neighbour that they had seen Shorty on TV.  “I was going out of my mind, and my neighbor tried to calm me down. I just didn’t want anyone to put him down thinking he was that sick,” said Oclisha, referring to Shorty’s heart murmur.

Shorty’s original family, who only surrendered him to give him a better life, is now in a position to care for him. ”I know these people have had the past seven years or so a hard life, thank God I’m not in their position, and we just hope this serves as a sort of a bright spot for them because they certainly deserve it,” said Dr. Peurifoy.

Of course it is heartbreaking for Miller and her 15 year old granddaughter who have looked after Shorty for 6 years, but they too want only the best for him. “I do want him back, but since they lost everything in Hurricane Katrina and they lost him… I wouldn’t mind them keeping him or anything because it was their dog first,” said 15-year-old Ta’layza.

“I want him to be taken care of. If they do keep him take care of him. Let him…let them know he’s just like a child.  He’s been very well taken care of,” said Oclisha.  It will be a couple of weeks before Shorty can travel as Dr. Peurifoy wants to ensure his health is stable, but then Shorty will return to New Orleans for a reunion with his grateful family.