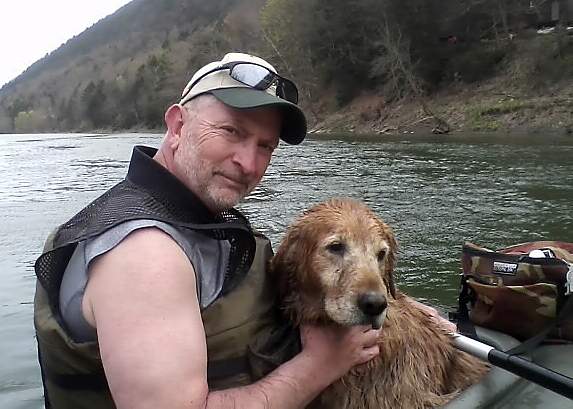 A golden retriever is lucky to be alive after being rescued on the Chemung River in New York State this past weekend.  The dog was struggling to keep above water and stay near a small island in the river when Joe and Amy Longwell spotted him from their kayaks, and if it were not for them he might not have made it.

“My wife and I always say that we see something different every time we kayak on the Chemung River, and (Sunday) was no exception,” Joe said. He and Amy had just maneuvered a tricky spot on the river and were congratulating each other when Amy spotted the dog, who they first named “Lucky”.

“I don’t know how I happened to spot him,” Amy said. “We had to do something.”  “We paddled over to the island and tried to stop ourselves alongside the dog. He was clearly exhausted and we could tell from the white fur on his snout that he was not a young pup,” Joe said.

Fortunately Lucky had a collar on which Joe used to grab him and pull him into his boat, but there were some scary moments before he was safely on board.  “As my wife steadied my boat, we had a few hectic moments wondering if I was going to end up in the river with the dog or whether he was going to end up in the boat with me,” Joe said. “Once I got him wedged onto my lap, he laid his head on my chest and began to shiver uncontrollably.”

The name Lucky changed to “Notso” after they realized his poor condition on Sunday evening.  He had a hard time getting up and around but did manage to eat and drink and seemed much better after a long sleep.  The Longwell’s already have an elderly dog and cannot keep him so they are hoping to find Notso’s owners and reunite them.  If they don’t he will end up at the local shelter.