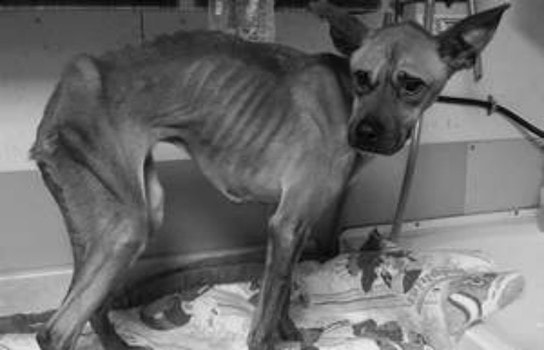 A man from Jacksonville, Illinois has been arrested on charges of animal neglect and cruelty after he dropped off a dog at a local shelter.  Due to the seriously malnourished appearance of the dog, the shelter staff felt as if they absolutely had to advise authorities of the situation, and Creighton Colson was picked up by police and taken to Morgan County Jail.

Protecting Animal Welfare Society (PAWS) founder and manager of operations Lisa Jackson said the whole thing started off after she received a Facebook message from someone that knew Colson.  The message contained a photo of a pharaoh hound that was pretty much skin and bones, and a plea for help.

“I received a Facebook message from someone who knows Mr. Colson who said they were concerned for the dog and they asked if I would take the dog,” said Jackson.  “Once I saw the pictures, of course, I wanted the dog immediately.”

Colson brought the dog to the PAWS shelter himself.  Coming face to face with the dog, now named Brody, it was decided the police needed to be called and a crime reported.

Jackson doesn’t want to put people off of bringing dogs in need to their facility.  They are still willing to help out dogs for any reason, and their not exactly in the business of reporting people for surrendering dogs in less than perfect shape.

“I don’t want people to be afraid to turn over animals to us, but I would ask them to, please, do it before the animal is in that kind of condition,” said Jackson.  “I don’t want people to think if they show up with a dog that is not in perfect condition, I’m going to run to the authorities.  But in extreme cases like this one, I can’t ignore it.”

Brody has already been adopted.  He is going to live with a couple that volunteer at the PAWS facility.  He is on his way to recovery after spending just a short time in the shelter in the care of the volunteers and staff.

“He just has such a sweet disposition.  Even for as hungry as he was, he never gets upset if you touch his food bowl,” said Jackson.  “His strength amazes me. For as little as he weighs, the fact that he could even stand on his own was mind-blowing to me.  Now that he’s got a week’s worth of groceries in him, he follows us everywhere we go.”