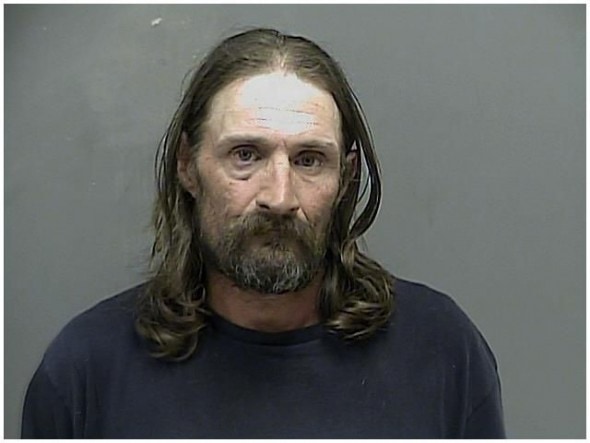 A man was arrested and charged with animal cruelty after police saw him kick a dog multiple times.  Jackie Myers, a homeless man from Kingsport, Tennessee was arrested for drunken disorderly, and animal cruelty, and taken from the scene by police.  The dog was taken and treated for minor injuries.

It happened around 2:30 pm on Labor Day.  An officer was parked across the street from the incident, where Myers ad a few other residents were near a public park gazebo.

Myers was said to have had the dog with him and on a leash.  According to witnesses, he was letting the dog run around on the grass in the park, while still on the leash.

For seemingly no reason at all, Myers then cocked back his leg, and kicked the dog, in full view of everyone.  The officer parked across the street even saw this, then saw him wind up and kick twice more.

“I watched in disbelief and then he kicked the dog two more times,” said the responding officer.

When the officer approached the scene, Myers became very hostile.  He began to swear at the officer, and was again acting menacing towards the dog, and then again the officer.  That’s when the officer sprang in and arrested Myers, according to police reports.

The dog was taken away from him, and Myers was subject to a background check while in police custody.  That’s when it was found out that Myers is wanted in New Mexico and Georgia.

According to a female claiming to know Myers, he suffers from severe post traumatic stress disorder,and was having a bad day.  He was however arrested for animal cruelty, drunken disorderly, and was taken to Kingsport City Jail.  There is no word on if Myers will be sent to New Mexico or Georgia to appear for any other crimes.